There’s a new Thor in town, and he is a she.

Wolverine is going to die.

Iron Man is about to become Superior.

The Spider-Verse event is going to upend (the recently resurrected) Peter Parker’s world, including introducing a version of Gwen Stacy as Spider-Woman.

Nightwing is now simply known as Grayson. Damian, who took the mantle of Robin during Dick Grayson’s tenure as Batman, is due for resurrection (he is the grandson of Ra’s Al Ghul after all).

The New 52 era is barely three years old and already there are rumblings about another crisis on the horizon.

The more things change, the less likely they are to change. In particular, I predict that Thor Odinson will be wielding Mjolnir and Steve Rogers will resume carrying his shield by May 1, 2015, the release date for Avengers: Age of Ultron. Iron Man might remain the same; but I contend that is due in large part to Tony Stark being written more and more to fit Robert Downey Jr.’s portrayal than it is any actual story elements.

These character changes are interesting. But, in the end, they’re hard to get excited over if you’ve been a fan of comics for any length of time. After all, John Walker (US Agent) and Bucky Barnes (Winter Soldier) have also been Captain America. Steve Rogers has also been in action outside of being Captain America, operating both as Nomad and Steve Rogers, Super Soldier. Thor has been a frog (thanks to Loki), an alien that looks like an anthropomorphic horse (Beta Ray Bill) and Eric Masterson (Thunderstrike), not too mention countless other variations in “What If…” stories. James Rhodes was Iron Man before becoming War Machine full time.

Ultimately, these characters are very much like an episode of The Simpsons; after decades of history most major changes exist for a very short window of time and the status quo is eventually restored. However, unlike the Simpsons, this return to “normal” isn’t an integral part of the story with a wink and a nod to the fact that nothing changes. These resets on top of resets are all bound to brands, marketing and deference to whatever the HIPPO (highest paid person’s opinion) says is canonical.

A couple of months ago April Daniels wrote something that I had been thinking for quite a while. Discussing the changes to the Star Wars Expanded Universe she said (emphasis added):

So Disney has decided that they’re going to nuke most of the previously established Star Wars canon. I think this is as good a reason as any to finally bury the destructive concept of canon in fictional works. Note that this does not mean that I am against stories in continuity with each other, that’s not my position at all. I love continuity, and the story options that it enables. But even as I enjoy continuity, I don’t see why we should be judging stories as more or less significant than another on any basis but their merits. And that’s all canon does, it arbitrarily privileges some continuities over others.”

A few years ago I was recommending the BBC show Merlin to a friend who is an English Professor with a focus on medieval literature. I told him that it cast the story of King Arthur in the same mold as Smallville and therefore it wasn’t entirely canonical. He responded, with a chuckle and pointed out that not even King Arthur’s canon was canonical. Arthurian legends are in interesting case study when it comes to canonical stories.

In many ways Arthur was one of the progenitors of the modern superhero stores. Arthur’s legacy is very much in line with the Cambellian monomyth that we know through characters such as Superman or Luke Skywalker. Across the U.K., and particularly Wales, Arthurian legends play a pivotal role in the history of Britain and its people. For centuries the Welsh viewed him as a savior figure, with the expectation that he would return from Avalon and take restore Wales to glory and independence from Great Britain.

The stories of Arthur Pendragon, began in Wales, yet arguably one of the most popular versions of Arthur was a creation of French writer Chrétien de Troyes. The work of de Troyes is also responsible for the introduction of Lancelot, a character who is readily associated with King Arthur but who doesn’t exist in the earlier literature.

Going back to the original Welsh histories you find a few different versions of a hero called Arthur Pendragon, multiple variations of the Knights of the Round Table and two extremely different versions Merlin that were later combined to create composite named Merlin Ambrosius.

As my friend noted, it is practically impossible to define a canonical Arthur. His convoluted history rivals that of Hawkman. However, unlike what DC has done with each variation of Carter Hall, Arthur remains Arthur. Arthur is a type of national brand, just like Superman or Captain America, without being bound by a clearly defined canonical structure. People can identify Arthur as a defender of Britain regardless of whether he was a king or merely a great warrior, and with or without the fabled Round Table, his betrayal by Sir Lancelot, or his marriage to Guinevere.

I contend that the Arthurian legends work so well and have survived the centuries because they eschew a strict canonical structure. The writers of each period adapted the character to the as necessary to fit the stories they wanted to tell. These myths were a means of sharing oral history or a way to celebrate a tribe, clan, or country.

Arthur remained a recognizable name throughout all of the versions and, in general, the audiences knew what to expect from a tale of King Arthur. Each storyteller imbues their particular version of Arthur with a degree of localization. Arthur simpliciter would remain the same, but the character was free to reflect the people, the place, and the time his story was being told. There wasn’t a central authority arbitrarily elevating one version of Arthur over another. Nobody was concerned that Arthur’s “brand recognition” would be diluted if someone read the French Vulgate Cycle before reading Malory’s Le Morte d’Arthur.

Understandably, these stories were created in a time where tribes were more isolated and predate our modern ideas of commercial branding. Sadly, I think our modernity has actually hurt our heroes more than any super-villain could hope.

It wasn’t Kryptonite that hurt Man of Steel; it was Warner Brothers’ insistence that audiences sit through another Batman movie disguised as another retelling of Superman’s origin.

The joke used to be that nobody stays dead in comics except for Bucky Barnes. Unfortunately, the success of this summer’s Captain America: Winter Soldier most likely means that Bucky’s resurrection — a wonderful twist on Steve Roger’s own resurrection created by Ed Brubaker — will be reduced to a simple formula for boosting sales and selling movie tickets. Imagine the stories that could have been told if Steve didn’t return from the dead. Furthermore, imagine the Batman stories if Batman R.I.P. didn’t retell the same story a year later!

As fans, we’ve been trained that there is only one Bruce Wayne, Steve Rogers, Clark Kent, etc… Any real changes must occur in Elseworlds, What If? or another non-canonical title. But why don’t we ever stop to wonder why this is the case?

Why can’t Bruce Wayne be like Arthur Pendragon? Why must Issue 100 have the exact same character that was in first issue? Beyond that, why do there need to be a seemingly endless amount of new “Number One” issues just to take a character in a new direction, particularly if that new direction ultimately leads to the same place as the old direction. 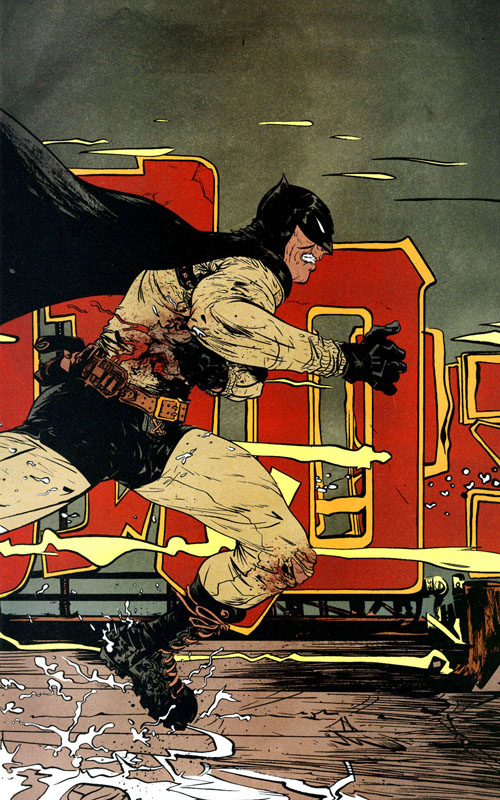 The fact remains, our modern myths contain hundreds, if not thousands, of rich and interesting characters. Writers should be free to tell the most interesting stories possible with those characters, not be encumbered by decades of canon and our modern, often artificial, expectations. Canon, as April Daniels said, has become an arbitrary privilege of one version of a story over another.

Instead of imposing limitations on these stories, why not open the marketplace to new ideas? I would love to read a Superman story whose central conceit was something with more substance than a debate about whether or not he wears red-trunks. I agree that there are, and I contend will always be, certain inalienable aspect of our heroes. But those traits shouldn’t need a new series of event comics or a major crisis every 3 years just so writers can feel free to write good stories. If Arthur and Lancelot can survive the decades without having their worlds destroyed every few years, then surely Superman and Spider-Man can do the same.

It would be great to read about a female warrior wielding Mjolnir, but why can’t she be her own character? Why does Sam Wilson have to become Captain America to get the attention he deserves? And isn’t Tony Stark already a narcissist with a god-complex?

These kinds of stunt-change show us the kind of stories we could have. Unfortunately for the reader, deference to canon insures that they never get to be fully realized.