In my opinion, few months of the year can rival the greatness of October. It’s the month of fall foliage. It’s when the best beers of the year are available. The days are comfortably warm, and the nights are crisp. It’s also the month of my favorite holiday, Halloween. To quote Sheriff Brackett from the 1978 classic Halloween, “Everyone’s entitled to one good scare.” But if there’s one medium that has trouble producing truly horrifying works, it’s the comics medium. For all it’s success in conveying a wide spectrum of emotions, horror and fear continue to be a struggle. This is perhaps due to the visceral nature of horror; it relies on more than just our vision to be effective. However, the genre is not a complete lost cause for the medium. Throughout the month of October, Comics Bulletin is going to be taking a look at the comics that have truly frightened us, starting with Severed by Scott Snyder, Scott Tuft, and Attila Futaki.

Scott Snyder is no stranger to horror comics (including one or two more we may look at this month). Between Wytches, The Wake, and American Vampire, Snyder has built an impressive resume within the genre. Even his brief run on Detective Comics was more horror-inspired than typical superhero fare. But while those works featured a more-in-your-face, full-of-shocks horror, Severed is a more deliberately paced work, which can be attributed to his collaboration with co-writer Scott Tuft.

As “the other Scott” writing Severed, Tuft has very limited comic writing experience, with only a small contribution on Swamp Thing in 2011. However, he brings a cinematic perspective to comic book storytelling, having worked for Warner Bros. and HBO as a production assistant, writer, producer, and director. The structure of Severed reflects this, as it reads much more cohesively – and the horror is more effective – as a singular, long-form story rather than seven individual issues. 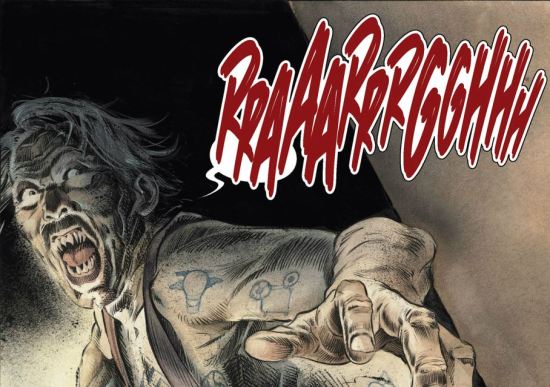 The third and final piece of the puzzle is Hungarian artist Attila Futaki. Prior to Severed, he had established himself within the genre with work on Asylum of Horrors, Creepy, and The Lovecraft Anthology. The style he employs within Severed is understated and naturalistic, but also raw and grainy. In many ways, it like a 1970s or early 1980s horror film put right on the page. It’s fitting, as that era is by many considered the best period of horror films.

The story of Severed is a recounting of past events in the life of 12-year-old Jack Garron in 1916, bookended by his life in the present. Through his own memories, Jack recounts the events that lead to him losing his arm. What makes the storytelling impressive is that readers are told upfront what will happen in this tale. This instantly creates a sense of dread. With each passing page, the Scotts and Futaki build tension until it reaches an unbearable breaking point. It is the same approach that makes the 1978 film Halloween work so well decades later. We know the big moment is coming eventually. Older Jack has told us as much, and we’ve seen him missing an arm. When it finally comes, there is a release of tension that allows the pacing to ramp up through the final pages.

Snyder and Tuft do an admirable job in building the world and characters through their script, and Futaki is equally as good in breathing life into these concepts. Jack is likable and has a sympathetic objective – to meet the father he never knew. Along the way, he meets Sam, another runaway or orphan around Jack’s age looking to survive in this world. Jack’s adoptive mother, while at times aloof, is another sympathetic character that feels authentic. And then there’s Fisher, an enigmatic figure and the book’s ultimate antagonist. From the first time he makes an appearance, the reader becomes aware that there is something off about him. Whenever he makes an appearance, the overall sense of dread ratchets up, which itself is a testament to the work of the creative team.

Too often hyperbolic terms are thrown around so that they lose all meaning, “hidden gem” being one such term. This is especially true when referencing the work of an all-star creator such as Scott Snyder. However, Severed is truly a hidden gem – a buried and forgotten part of Snyder’s resume as reader flock to his Batman, Wytches, and event comics like Dark Nights: Metal. However, those that happen upon this miniseries will find a tightly plotted and wonderfully illustrated yarn, perfect for curling up on the couch on a dark night this Halloween season.