Home
Classic Comics
Classic Comics Cavalcade
The annual Phil Seuling New York Comic Book Convention–in the late 1960s, through the early ’80s–was sometimes held for FIVE days around July 4th, and could certainly be considered the predecessor to what San Diego has become.
(Was it not called “The International Comic Art Convention”?!)
In its time, the con was where the world of oomics in both its professional and most fannsh aspects came together for some joyous moments in an era that simply just can’t, for a number of reasons, be recaptured.
(I had the pleasure of being what Phil called the line producer for the 1976 and 1977 shows…)

Above: Phil Seuling from a 1977 appearance on The Mike Douglas Show
Now, imagine a great portion of some of the most important talents in comics being placed precariously upon the roof of a structure about to be condemned.
Well, I’m exaggerating.
…But only a little bit.
In 1976, Phil booked the Hotel McAlpin–at 6th Avenue and 34th Street (just up the block from where Kong encountered the Empire State)–in the final days of its long and illustrious history. 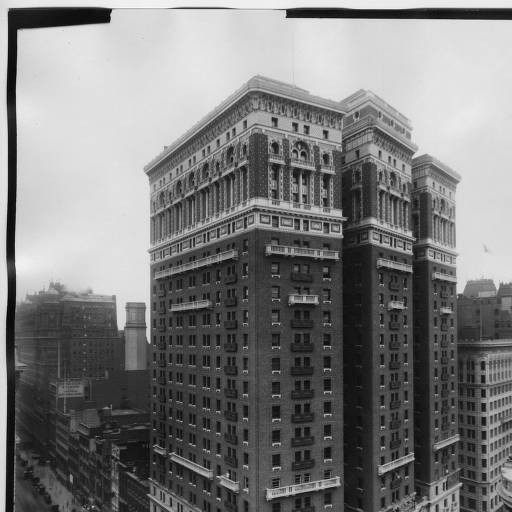 Above: the Hotel McAlpin, circa 1915
Across the next several months, the McAlpin would begin its conversion to an apartment building.
The hotel wasn’t entirely decrepit.
In fact, in the last day or two of the convention, the television networks were laying cable across the lobby floor, as one of the Democratic presidential candidates–was it Jerry Brown?– was using the McAlpin as his headquarters.
The 1976 Democratic Presidential Convention at Madison Square Garden, only an avenue away, was imminent.
This was the BICENTENNIAL year!
After President Gerald Ford had essentially told Manhattan, in the words of the New York Daily News, to “drop dead” (when facing its financal difficulties), the city was making the most of its opportunities in this national celebration.
For the first time, there was a gigantic flotilla of historic ships that had sailed into the city’s shores, and a huge fireworks display was planned for the Fourth, above the metropolis’ eastern waters.
Guests at the Seuling show, and some dealers, were informed that there’d be a lovely opportunity to view the gala from atop the hotel.
Now, maybe there was another access…
But a couple of days earlier, some of my more rambunctious convention friends had discovered what looked almost like a secret ladder from the hotel’s top floor, to the outdoor exterior one flight above.
Did Barry Smith and Bernie Wrightson and Mike Kaluta and Jonni Levas and the hundreds of others all climb this odd, decades old ladder to the roof?
I don’t know.
(I suspect, today, that my friends and I actually ascended to an EXTRA-high tower, one flight above the hotel’s “upper deck.”)

Above: Members of the Blackfoot Tribe of Native Americans visit the rooftop garden in 1913
But there WERE gaps in the McAlpin’s rooftop EVERYWHERE.
(And another thank-you to my old-time comics fan pal, Paul Jones, for literally grabbing my arm and saving me from FALLING through a twenty-stories-high hole in the flooring!)
The vista was ultmately neat:
Clipper ships of all sorts in Manhattan’s harbor, and an okay fireworks presentation.
But the clearest memory I’m left with, crystaline, really, is of all the fun we had:
So many folks in the comics scene of the time, HUNDREDS of feet above New York City, wine and soda classes in hand–
Not seeming so terribly far from the more peaceful and enchanting elements of the ’60s, in those rarified climes–
Enjoying a summer’s night.

James H. (Jim) Burns was a pioneer of the second wave of fantasy and science fiction movie magazines, being one of the first writers for Starlog (and several other late 1970s publications), a contributing editor to Fantastic Films and Steranko’s Prevue. (He wrote the earliest of these articles, when he was THIRTEEN…!) Jim was also a key figure in many of the era’s North Eastern American comic book and Star Trek conventions. Burns was one of the field’s first writers to cross over to such mainstream fare as Gentleman’s Quarterly, Esquire and American Film, while still contributing to such genre stalwarts as Cinefantastique, Starburst, Heavy Metal and Twilight Zone magazines. More recently, Jim has made several contributions to Off-Broadway and Broadway productions, become active in radio, and written Op-Eds or features, for Newsday, The Village Voice, The Sporting News, CBS-NY.COM and The New York Times.

You can read more of Jim’s articles at The Thunderchild.