BOOM! Studios is one of the best in the comic industry – especially of the corporate-owned publishers – in producing high-quality original graphic novels. Lo and behold, they just announced their latest original graphic novel, courtesy of their KaBoom! imprint. For the complete details and preview pages, check out the official press release below.

Your First Look at I MOVED TO LOS

ANGELES TO WORK IN ANIMATION

Discover The True Story of How To Succeed in December 2018 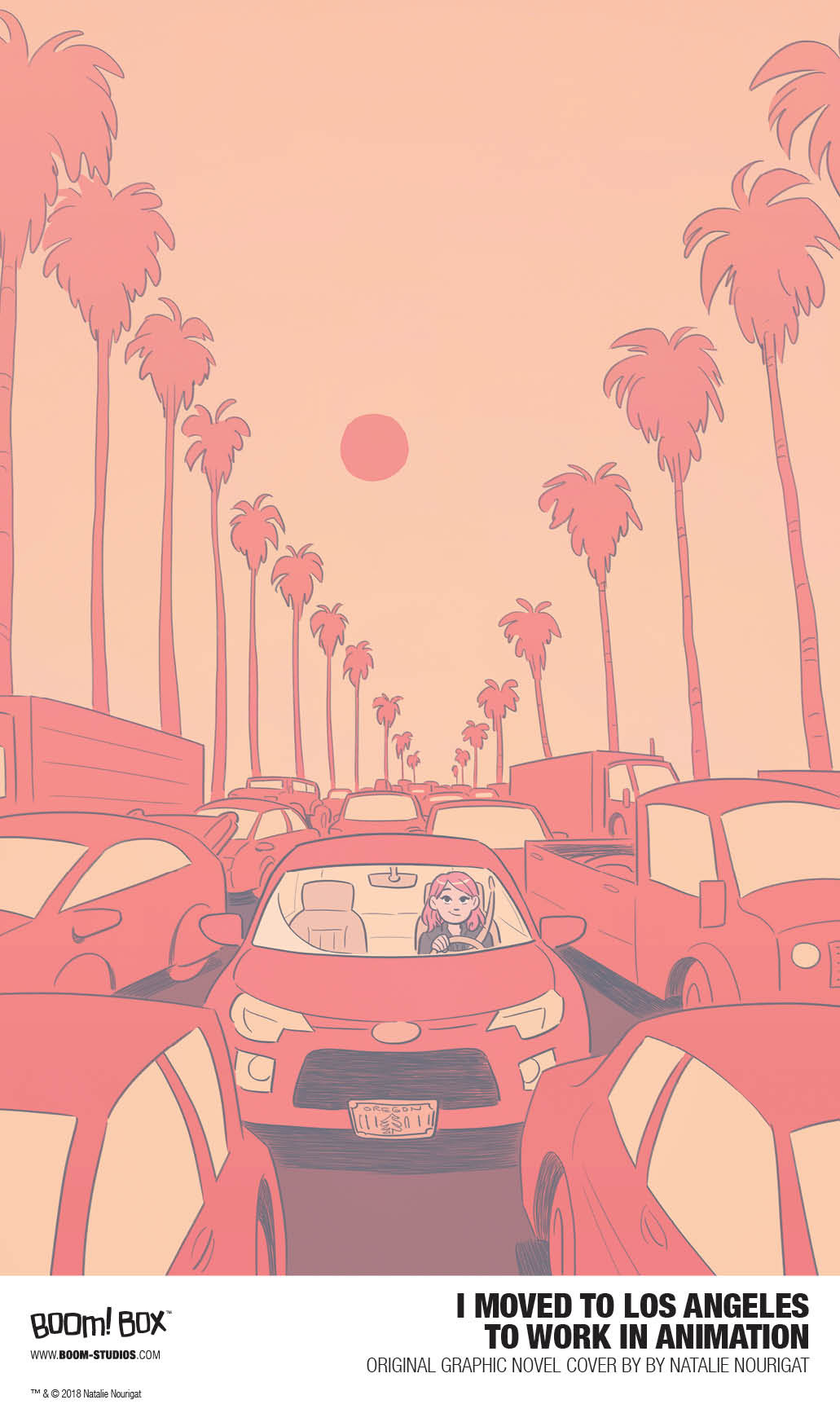 LOS ANGELES, CA (October 19, 2018) – BOOM! Studios today unveiled a first look at I MOVED TO LOS ANGELES TO WORK IN ANIMATION, an original graphic novel in December 2018, based on the true story of cartoonist Natalie Nourigat’s quest to move to Los Angeles and get a job in animation…and how you can too.

An entertaining, informative, and inspiring journey through one of America’s most iconic cities,  I MOVED TO LOS ANGELES TO WORK IN ANIMATION is a unique guide perfect for anyone looking to break into animation or make their dreams come true.

When she left her life in Portland to move to Los Angeles and pursue a job in animation, Natalie Nourigat realized that despite her research, nothing truly prepared her for the wild world that awaited her in the studios of Southern California. This autobiographical how-to graphic novel explores the highest highs and lowest lows of pursuing a dream in animation with a dose of humor and advice not found anywhere else!

I MOVED TO LOS ANGELES TO WORK IN ANIMATION is the latest release from BOOM! Studios’ critically acclaimed BOOM! Box imprint, home to popular original series such as Lumberjanes by Shannon Watters, Grace Ellis, Brooklyn A. Allen, and Noelle Stevenson; Giant Days by John Allison, Lissa Treiman, and Max Sarin; The Backstagers by James Tynion IV and Rian Sygh; The Avant-Guards by Carly Usdin and Noah Hayes; Fence by C.S. Pacat and Johanna The Mad; and Goldie Vance by Hope Larson and Brittney Williams. 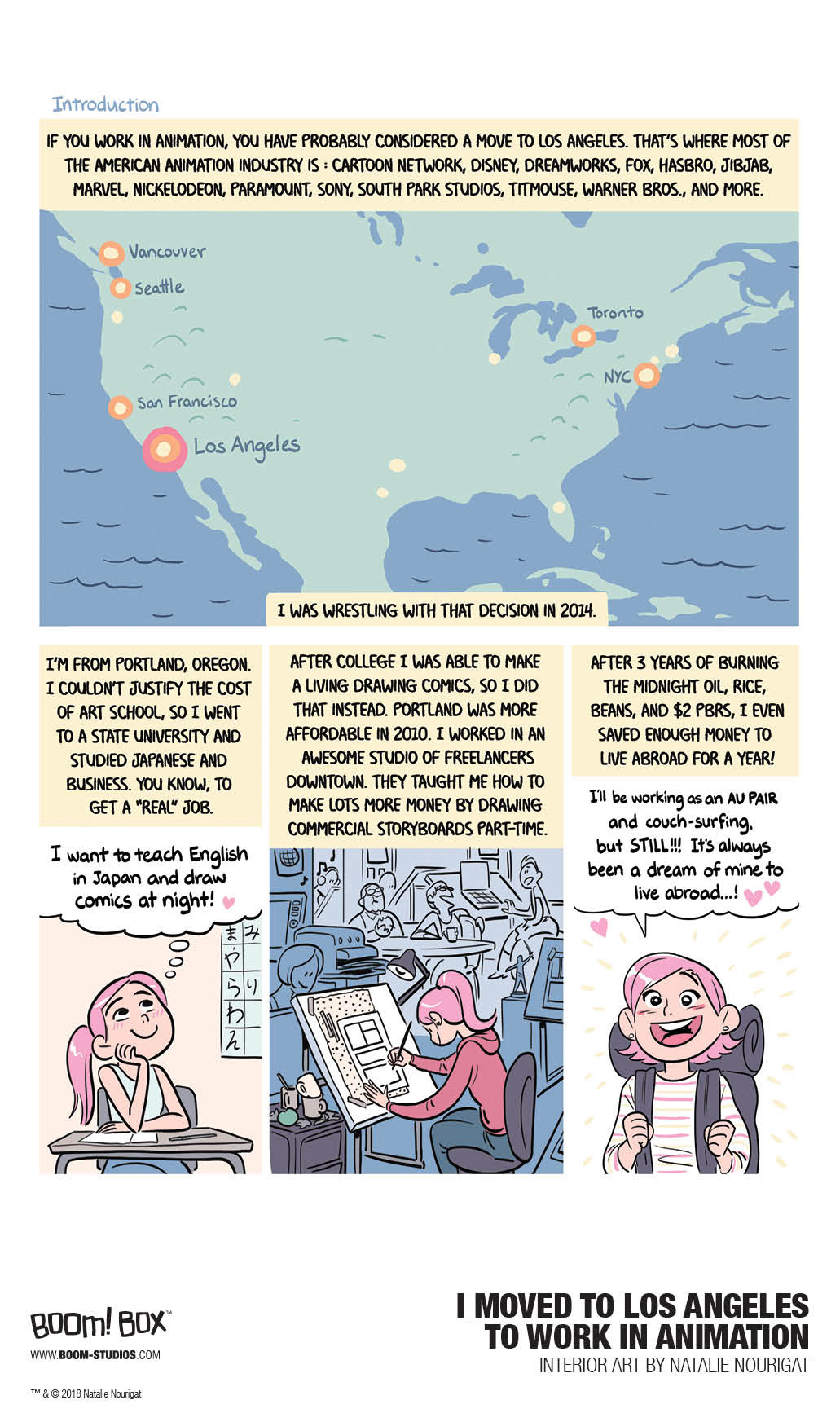 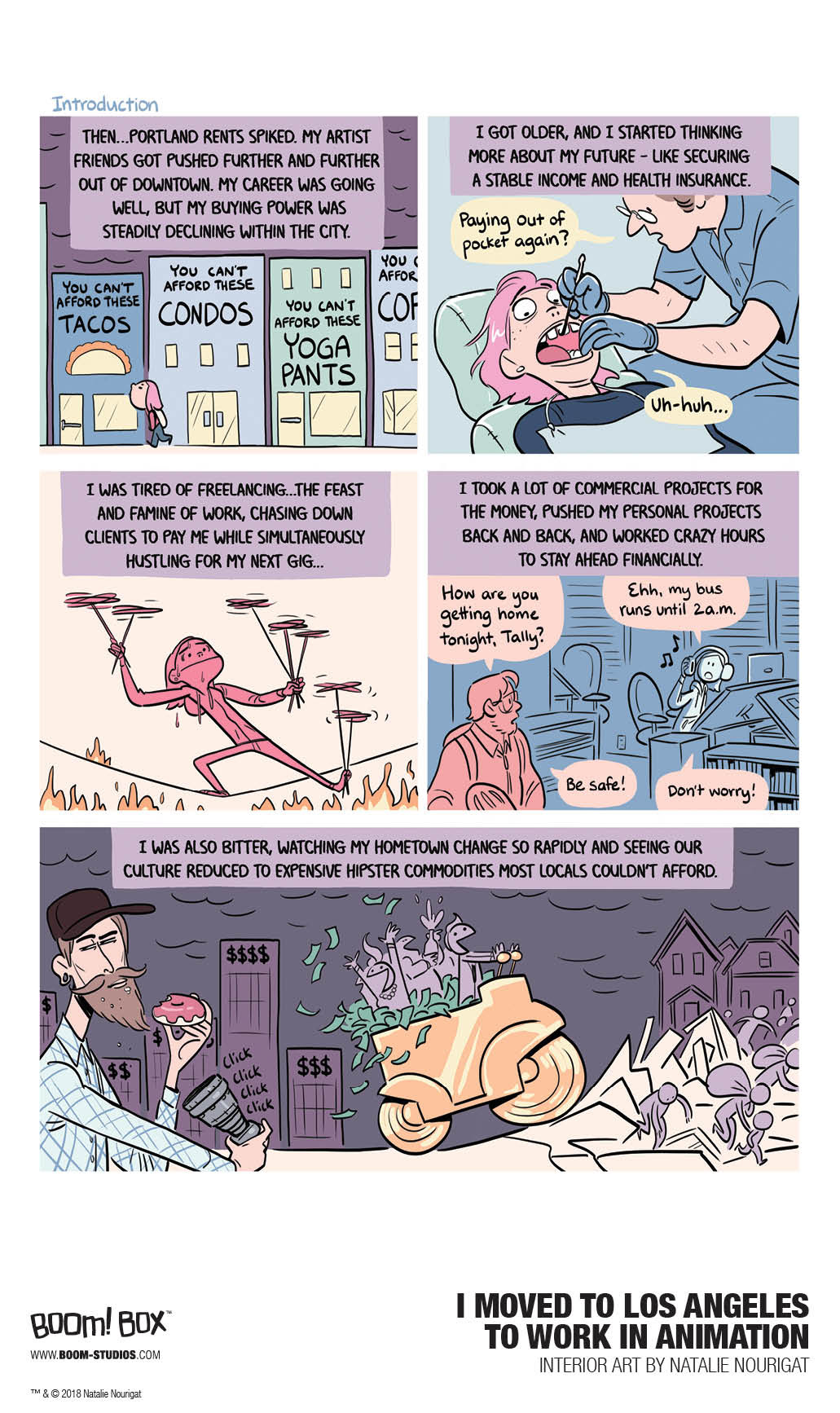 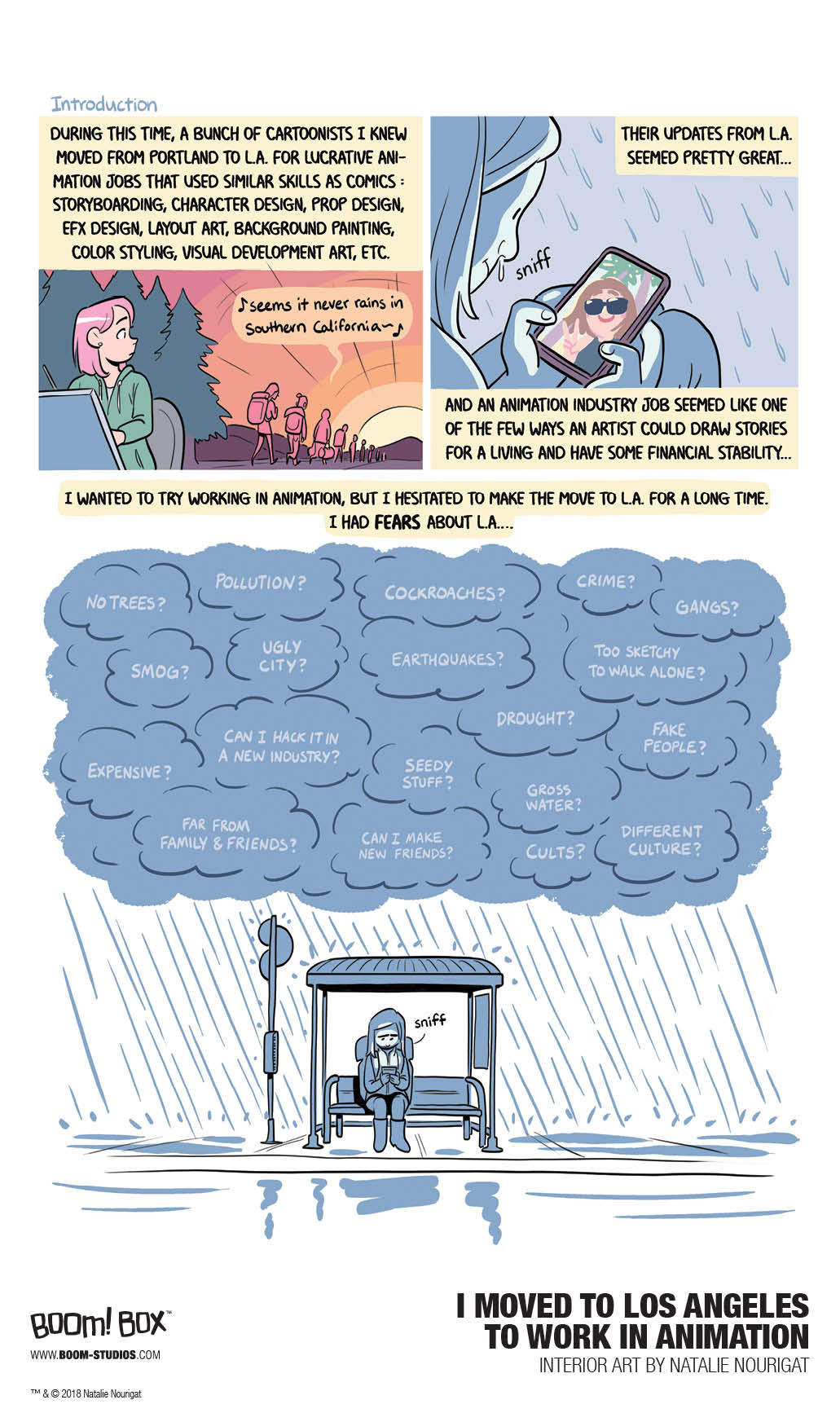 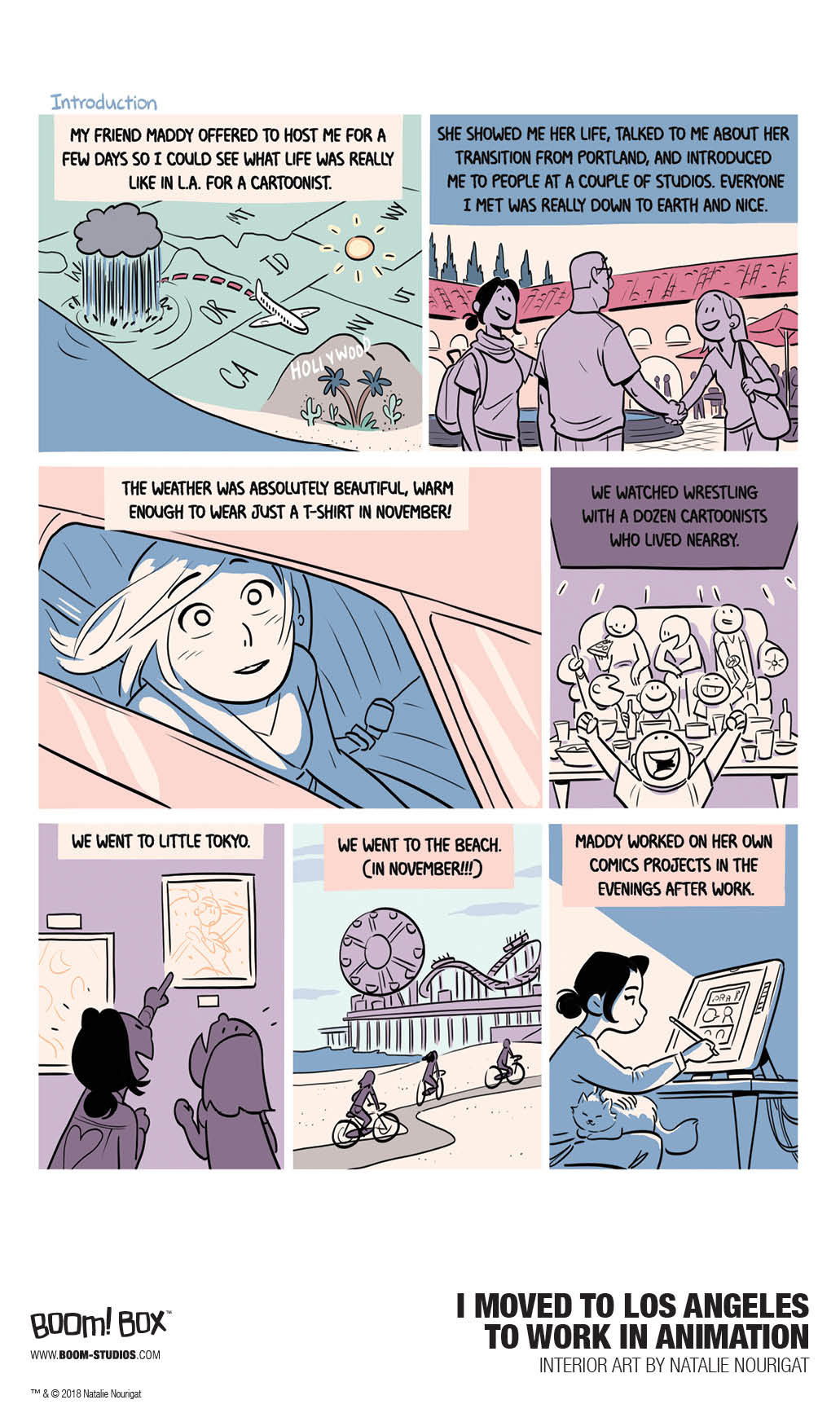 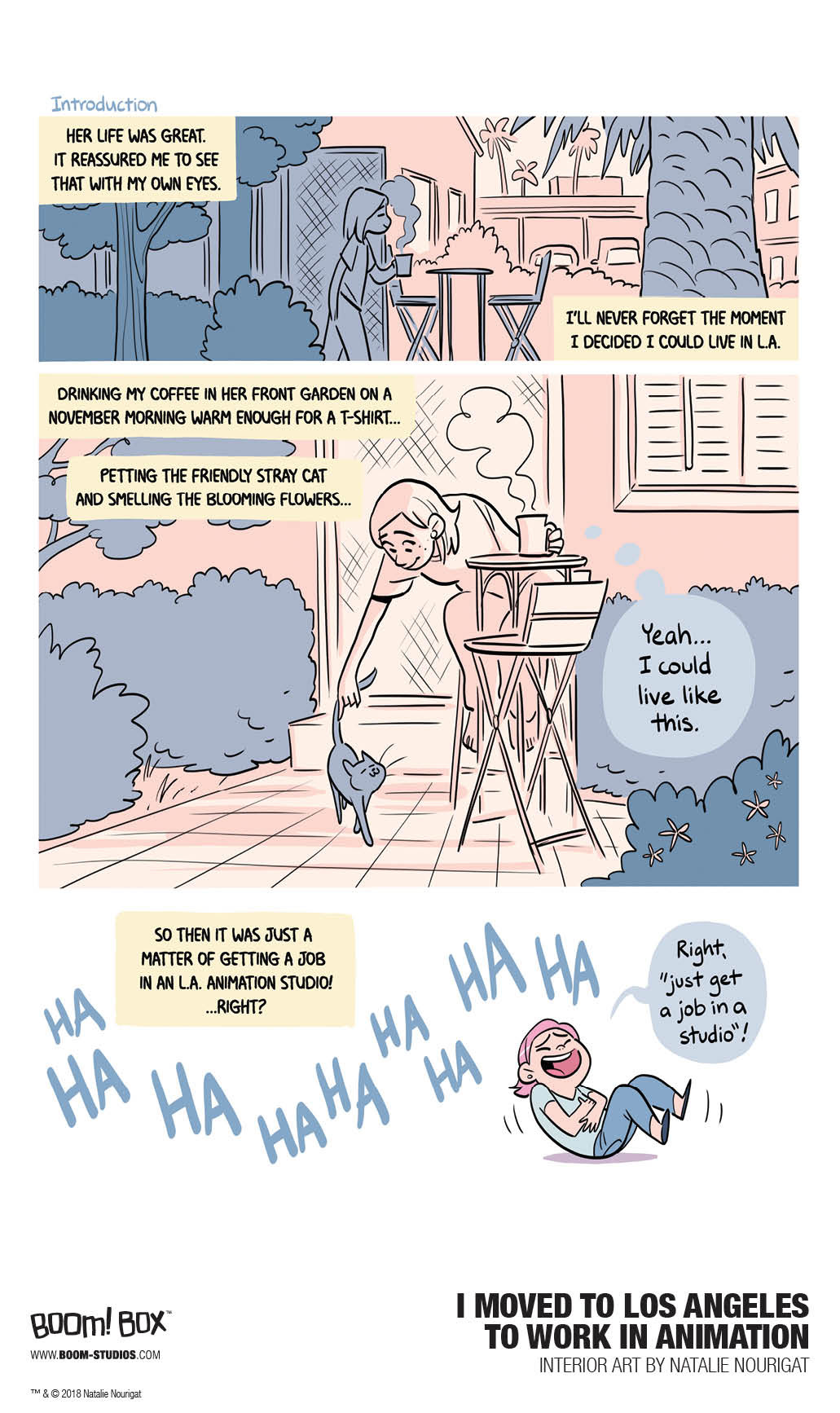 For more on I MOVED TO LOS ANGELES TO WORK IN ANIMATION and more from KaBOOM!, please visit www.boom-studios.com and follow @boomstudios on Twitter.