One of the most fun conversations I had at this year’s Emerald City Comicon was with Art Baltazar and Franco, talking kids’ comics and why they’re great for readers of all ages!

Jason Sacks for Comics Bulletin: Who’s Grimmiss and why should we care?

Franco Aureliani: You should because it’s us. But other than that, he’s someone who’s created specifically to appease the volcano goddess of Grimmiss Island, who’s just very, very upset and is ready to have a huge meltdown. So the…

Franco: The Mama Woogee witch doctor. The local tribe conjures him up in a cauldron with some hot peppers and some other spices and he comes jumping out.

Baltazar: Yeah, they conjure him up whenever there is a threat to the island and the volcano goddess is about to fry everybody. So they create him to solve the problems and any threats. But he’s only available for thirty days, because then he has to go back into the pot.

CB: What does he do? How is he going to be able to stop the threat?

Baltazar: He brings her flowers. He falls in love with her.

Franco: His fix is love.

Baltazar: And then they have a romance inside of the volcano.

CB: That’s a hot romance! It’s hot love going on in there.

Baltazar: Yeah. And it’s so weird that we’re doing stuff with Grimmiss Island that’s never in an all-age comic. We have a sex scene or a love scene, but it’s off panel.

Baltazar: And then the island heats up with romance. We have voodoo witch doctors creating up a little demon. So it’s kind of fun.

Franco: We have death showing up at some point.

Baltazar: Death and the devil show up in issue three. We call him B.L. Bubba Crisp. He’s from Hades. So we have a lot of monster kind of things that I am sure a lot of groups will say, “Hey, you guys.” But, no, it’s all fun stuff.

Baltazar: Yeah, it’s so much fun. We feel so free with Grimmiss because it’s our own character. We’re just letting it all out, letting it all go. And Dark Horse loves it and our editors are laughing. But the only correction I get is maybe I spelled a word wrong.

CB: Well, of course you built up that with Dark Horse Itty Bitty Hellboy. It’s fantastic.

Baltazar: Yeah, thank you. That’s cool, too. We’re doing another series on volume 2 in Itty Bitty Comics. They have search for the were-jaguar. They’re looking for Ben.

Baltazar: It’s silly because Ben is just a big, loveable, kind of like a big puppy, puppy/creature beast. They also have to bring underwear to an island of Rodgers. There is a whole bunch of naked Rogers on the island, but only one pair of underwear. It’s true.

CB: Can’t have that, especially in an all-age book, Mignola’s book.

Baltazar: Yeah. We find out what that button on his chest is for, too.

CB: So how much freedom does Mignola give you to do whatever you want? Because you go pretty far away from that intense seriousness.

Baltazar: He told us at one of the conventions that his wife and daughter approved of them. They want us to do this. And they told him if he says no, he has to leave the house. That’s what he said.

Franco: So basically we have free range to do whatever we want.

CB: I guess so. He wants to stay married.

Baltazar: He was at our store in beautiful downtown Skokie, Aw Yeah Comics. He was there a few weeks ago. And I pitched him a series. And he looked at me, raised his eyebrow, put his hands up, and says, “Well, you know what you’re doing.” So he likes us.

CB: Do you have a favorite story you did with Hellboy?

Baltazar: I like when we sent him to hell.

Baltazar: And then the next issue we sent him to heaven.

Baltazar: So he got touched. I don’t know if it was God who touched him. We gave him wings, remember?

Baltazar: So there’s a lot of good stuff.

Franco: I think one of my favorite things is going to be the island of Rogers, where they’re all naked. It’s pretty funny.

Baltazar: And then the last volume, in issue five of the first Hellboy run, he took his clothes and went in the bushes. So they went swimming in a little pool. It was real fun. I love it.

CB: You get to do different ways of covering it all up and everything.

Baltazar: Yeah, he has little strategically place bushes and stuff. It was fun.

CB: Hell on the cover and everything. But no, it’s like all ages fun stuff, too.

Baltazar: Yeah, it’s cool. It’s so unbelievable because I know an artists’ dream, especially a cartoonist and a creator, is always to do their own characters. And that person is embracing us with that. And it’s unbelievable. I love it. I feel honored to be able to do this with him.

CB: Well, you keep building your audience, though, right?

CB: They love your stuff.

Baltazar: I have been doing it for twenty-one years.

CB: What did you do before coming to Dark Horse doing this?

Baltazar: We did stuff for DC Comics with Tiny Titans, the Superman family.

Baltazar: Before that I worked for Disney Adventures, the little digest magazine. Before that we were self-publishing. So I started around ’93, ’94. I suffered for about seven years, sleeping in my van at conventions and showering at state parks. It was my thing. And then I lived off of conventions for like six or seven years.

Baltazar: Yeah, so I was real poor. And every car I owned I had to sell it just to pay my rent at one point.

CB: And now you’re living it, basking in the glory.

Baltazar: We still only have one car at my house, though. I don’t want to buy another vehicle.

CB: You have to buy a million dollar home in Skokie.

Baltazar: No, no, no. I have a regular house.

CB: Oh, okay. You’re not a millionaire after all.

Baltazar: No, I am a thousand-air.

CB: Well, maybe until the movie deal comes out. Are you going to merchandise? Try to make something out of this?

Baltazar: They made Hellboy dolls already.

Baltazar: They have the plushies.

Franco: And if people dig it. It’s basically really up to them.

Franco: If they’re buying it, then we can do that stuff.

CB: The buzz so far seems really good about it.

Franco: It does. We’re really happy.

Baltazar: And they made a banner. Did you see the banner in the other room?

CB: Yeah! How did that feel?

Baltazar: It was awesome.

CB: Are you going to ask for it when you leave?

Franco: We went and took selfies with it.

Baltazar: Yeah, every day we take a picture with it so they can see our different outfits of the day. 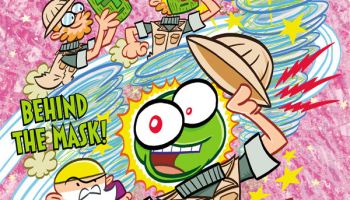 CB: That’s awesome. So you did Itty Bitty Mask, too, and a few others, right?

CB: Did you love coming in and doing a different take on these characters?

Baltazar: Yeah, Mask was awesome because it’s the twentieth anniversary of the movie with Jim Carrey.

Franco: The twentieth anniversary of Mask himself.

Baltazar: Yeah, that’s right. But we didn’t want to do Stan Ipkiss. We didn’t want to do the same character. So we created a whole new batch of characters. And then the first issue you think (our guy is Herman Shazbert) he’s going to wear the mask, but his mom ends up wearing it, like the grandma.

Baltazar: The grandma wears the mask.

Franco: Everybody does, but him.

Baltazar: Yeah, he doesn’t get the mask until issue four. So it’s kind of fun.

CB: Dark Horse really gives you the freedom to do what you want to do.

Baltazar:  Yeah, Mike Richardson said okay. He put his arm on me and laughed, so I was okay.

CB: He’s really not going to say no to you at this point.

CB: You could mess with any of the characters.

Baltazar: I could try, yeah.

Baltazar: Oh, that would be fun.

CB: Do you ever want to do a serious piece or do you just love playing with comedy?

Baltazar: Franco could write that and he could do a lot.

Baltazar: Cartooning is in my heart; it comes out of me that way.

Baltazar: It’s hard for me to think of something evil or scary, but I watch those movies.

CB: Even just putting that on the movies, right?

CB: The silly twist on the movie is great.