To continue our exploration of Comics Poetry, Small Press Editor Daniel Elkin conducted an interview with Chrissy Williams. Williams is a poet, editor and tutor living in London. She has published a range of poetry pamphlets and criticism. A full collection, BEAR, will be published by Bloodaxe Books in May 2017. She edits The Wicked + The Divine, published by Image Comics, and is the co-editor of Over the Line: An Introduction to Poetry Comics with Tom Humberstone.

Daniel Elkin for Comics Bulletin: For the most part, people can pretty much give you some sort of working definition of “comics”. As well, many can tell you how “poetry” is different from “prose”. When I ask people to define “comics poetry,” though, I am usually confronted with blank stares or shrugged shoulders. I think it is fitting that I start this interview with you, as Editor of Over The Line, by asking you what your definition of this genre is?

Chrissy Williams: Hmm. This could get messy. Bear with me. It’s best to say up front that I don’t think poems “need” comics to make them accessible, and neither do I think comics “need” poems to make them more highbrow or what have you. Both artforms are doing just fine, and those ridiculous stereotypes of low vs high culture are painfully outdated now. I do think something really exciting happens when you combine the two though – when comics are enticed away from the narrative drive that’s inherent to a sequential visual medium, and when poetry is challenged to react to and work with visual elements on the page.

There are various existing genres into which many poetry comics may already fall (I generally say “poetry comic” by the way, not to give any priority to the poetry, but rather to avoid any confusion with “comic poems”, which are already their own very different hilarious genre of poem.). Poetry comics could fall under the definitions of visual poetry, experimental poetry, experimental comics, abstract comics, and more, I’m sure. If a piece involves sequential art plus text (whatever kind of text), then surely that makes it some kind of a comic by most people’s definitions? But, if the text is written by a poet, then part of me very strongly wants to claim the work as poetry too. The trouble with the genres I mention above is that they’re situated either in comics or poetry, not both.

So I suppose the thing to say, even though I realise how obvious it sounds, is that the genre needs to be defined fundamentally as an inextricable combination of both comics and poetry, neither of which should be dispensable. In the best poetry comics, I believe, the piece would fail utterly (or at best be horrifically diminished) if you removed either the poetry or the artwork from the composition.

That may not be what you mean though. You may mean “yes, fine – but what is it?” Or, in other words, what does it do that distinguishes it from either comics or poetry? Well, poetry is used to creating meaning with text alone (either on the page, or audibly), so putting it into a visual sequence makes it something different. It now finds it has help in building imagery that it didn’t have before, and has to ask itself “how can we keep this interesting and make sure we’re not just repeating ourselves?” Comics – hmm.

This is trickier. (See above my mention of experimental or abstract comics.) There’s a stronger case for how poetry comics differ from poetry than how they differ from comics, although I would still say that if you look at mainstream comics as a whole, you’re not going to find many that try to emulate poetry’s ability to record a complex single moment, and present that as an entire artwork. Normally those moments are presented as one part in a whole system of storytelling about a wider story. Poetry, I think, allows comics to refocus themselves somehow, zoom in, and move away from their traditional modes, though there are exceptions, of course. Overall though, what becomes most important in poetry comics is the language of communication, both in text and art, which lets us explore how they might work together.

CB: Do poetry comics use a language of communication that is unique and specific to the genre, or is it similar to the language utilized by successful comics and poetry already and transferred to a different mode of communication? In order to help me get my head around this, I’m wondering if you can provide an example of a piece and explain how it is something that, as you said, “would fail utterly (or at best be horrifically diminished) if you removed either the poetry or the artwork from the composition”?

Williams: In a way it’s both. Making a poetry comic ideally would require literacy with the medium of comics, and how meaning is communicated with the use of sequential art (panels, space between panels, between pages, etc). It would also ideally require literacy with the medium of poetry, and what you can communicate with text alone (creating images with words, the power of less being more, etc). I say “ideally” because I do think it’s possible for newcomers to produce successful pieces of work – there is always an element of alchemical instinct involved in the creation of art. But I also say “ideally” because often the most ambitious, accomplished and interesting pieces come from people who clearly have a strong knowledge of both poetry and comics, the most important one (for the purposes of it being a visual medium) being comics – or at least that was what I found when editing the book with my co-editor Tom Humberstone.

Okay, so, yes — you’re slapping two existing languages together. But I don’t think it’s as easy as saying, “it’s a little bit comics, a little bit poetry”. You need to be familiar with the two languages, but they are then merged into a single artwork, communicating with a new single language made up of lots of different parts, which makes things very interesting.

To give you another example – my mum’s Italian but I grew up in England, learning both Italian and English. In our family we spoke, and still speak, a sort of hotch-potch language that mixes the two in very specific ways and is bespoke to us. I think of it as one new language that we have created out of two different parts. I feel like it’s the same for poetry comics. If you know both languages, you’ll find that you’re best placed to speak this new composite language, and are most likely to see the opportunities for play within it.

Which is of course not to say that you can’t enjoy poetry comics if you’re a poet with no experience reading comics and vice versa. The reactions I’ve seen from people in workshops I’ve taken has generally been one of liberation – “Oh, I never thought about approaching the page in that way” etc. I think as human beings we all have a fundamental vested interest in communication, so when you see something communicating in an unexpected way, it is automatically interesting.

Look at what the art is doing in the piece below by Oliver East and feel the effects of this changing repetition. Then look at Lorraine Mariner’s text and feel its sparseness, but also how well-chosen it is, including that silent panel. Now imagine the absence of either element. 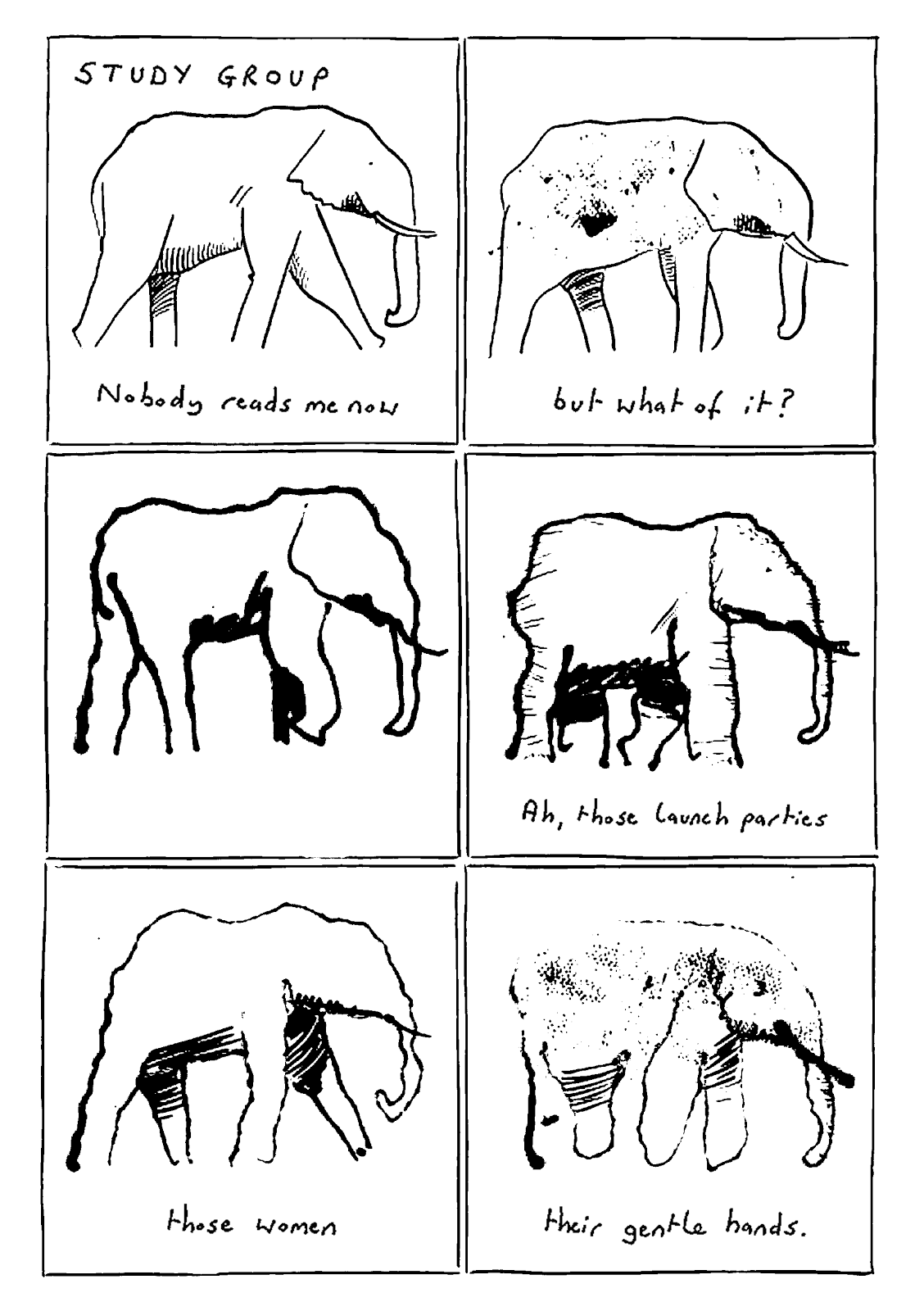 CB: I think I see what you mean here. The juxtaposition of the art with the words adds another layer of … for lack of a better word … “meaning” that wouldn’t exist without the intersection of the two. Using this as our example, then, would you say that in a great work of poetry comics, the art works to add an emotional resonance to the poem (and, perhaps, vice-versa) instead of illustrating the intent of the poem (and, again, perhaps, vice-versa)? And, if so, how is this “comics” and not “conceptual art”?

Williams: To the first question I’ll simply answer “yes” – I think that’s exactly right. To the second, I feel like “conceptual art” is a wider umbrella term than “comics”, one that may contain any number of different genres of art, whether written, or visual, or musical, or what have you. The reason to call it comics is because of the nature of the visual sequence – this is the language that comics speaks in and has done the most work in developing, so it should get that credit.

It’s also a more specific term than just “art”, and I think the specificity here is important. There are already many existing collaborations which involve poetry and visual art which are also really interesting. But there is a difference between looking at “art” and looking at “sequential art”. Sequential art has a different drive, and trying to get poetry to relate to and interact with that is what interests me most at the moment.

The other thing to say about the example above btw, is that someone might look at it and just think “it’s a comic” and that’s perfectly fine too. The specificity is important to creators I think, in terms of how you approach a new work you are making, but once it’s been made, I don’t think it has to be too closely defined in order for an audience to enjoy it.

CB: So perhaps poetry comics is the kind of thing that is limited by an exact definition and operates best in that liminal space of “you know it when you see it”?

Williams: Hee, I want to roll my eyes at how woolly that sounds! But I guess – in some ways – perhaps? I feel that it’s a creator’s responsibility to take themselves and their process seriously, and think hard about all these things — what you can do with different mediums, how each one works best, how they can be challenged and played with. Ideas + Alchemy + Execution. Don’t take anything for granted. But from an audience point of view, I don’t think it matters as much. It can sometimes be useful if you know a creator’s intentions, but really you just need to respond honestly to the work that’s put in front of you.

CB: How do you see poetry comics developing from here?

Williams: I have no idea! And that’s really exciting! At the moment I think you have a few committed people who have been doing great work to get this notion of poetry comics out into people’s heads – for example Alexander Rothman, Bianca Stone, Paul K. Tunis, the whole team at Ink Brick generally. But it still feels like poetry comics is quite new, really (even while you can look back to people like Joe Brainard in the sixties etc). Tom Humberstone and myself wanted the Over The Line anthology to be a jumping off point rather than an act of definition, or limitation. I’m excited to see how poetry comics develops, to see longer more substantial works, and to see poetry and sequential art interacting in ways that hasn’t even occurred to me yet.

You can pick up a copy of OVER THE LINE: AN INTRODUCTION TO POETRY COMICS, the book Chrissy Williams co-edited, over at the Ink Brick store HERE