Another adaptation from webcomic to print, Horimiya saw its start in Square Enix’s monthly Gangan Online magazine as Hori-san and Miyamura-kun, the debut work of mangaka HERO. The serial publication in Monthly G Fantasy adapts HERO’s story at the hands of mangaka Hagiwara Daisuke. The work is also Hagiwara’s debut in publishing serial manga. Yen Press provides the English release with Taylor Engel, a newcomer to the manga translation field, at the helm of the adaptation.

As the title implies, Horimiya is the story of two high school students, Hori Kyouko and Miyamura Izumi, who couldn’t seem more ill-suited for each other. Hori is outgoing and popular, impeccably styled and dressed every day she comes to class. Miyamura, on the other hands, is a gloomy loner with a reputation for being some kind of creeper fanboy. Yet beneath the surface, there’s more than meets the eye to both of them. With her parents frequently gone for work, Hori’s forced to keep up on housework and chores while tending to her younger brother, Shouta. One day when Souta has an accident while out playing, a mysterious benefactor helps him find his way home. Imagine Hori’s shock when she learns that the pierced up goth punk is none other than her classmate Miyamura. 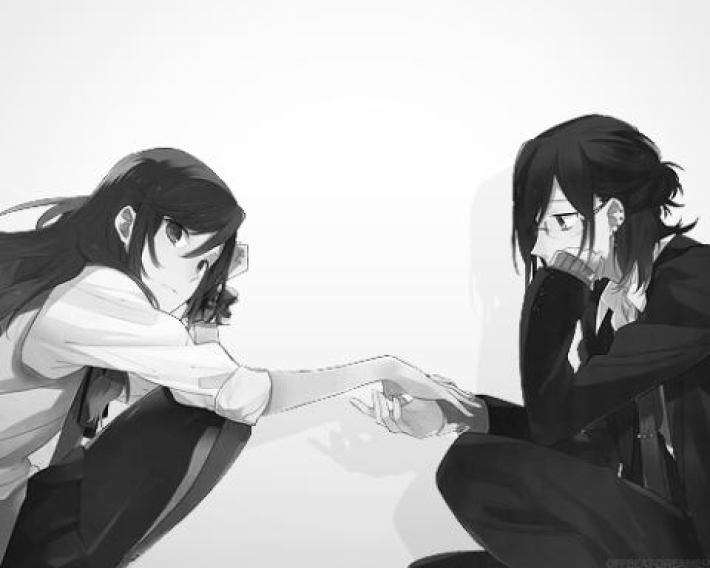 Their secrets both exposed, Hori and Miyamura quickly come to find a sort of comfort in having someone to share their personal lives with. Miyamura begins to visit Hori’s house more often to keep Souta company and Hori even comes to rely on him for help with shopping chores and the like. Yet as the two grow closer, the question remains whether or not they’ll be able to continue to hide their secret lives from their classmates and just how their own relationship might develop.

Although Horimiya isn’t published under a strictly shoujo label, its slow build, day in the life pacing gives off a very distinctly shoujo feeling. There’s the typical sort of misunderstandings of who might have feelings for who and confessions after class that you might expect from a shoujo series, yet none of them seem to seize the focus of the story for long or expect the sort of melodramatic fallout that you might expect in a different genre.

Instead, the series remains faithful to its characters throughout the volume. Miyamura acts just as strange and socially awkward as you might expect of a high school loner, and Hori shows the sort of practical consideration and determination that would come from years of being the caretaker for her younger brother. In this way, it’s not a story that packs any sort of emotional punch or drama, but still provides a refreshing story of how people come to know each other and learn to interact with each other. Of course, the title makes the manga’s endgame pretty obvious, but it’s nice to see a romance written in such a way that lets the reader really come along for the ride and learn just how two opposites might attract.

Perhaps some of the shoujo-esque feeling of the work is also due in part to the style of Hagiwara’s adaptation. The characters are drawn with the sort of fine lines and slender features that one would come to expect out of a manga with an intended female audience. Hagiwara does at times also fall into the trap of indistinct character design–Hori and her classmate Yuki wind up looking nearly identical more than once–but by and large creates a good sense of setting and emotion with his art that rings true to the story.

Accompanying this steady, slow build storytelling, Engel’s translation provides a truly seamless adaptation into English. For a story that’s so heavily character driven, there’s no points where the translation stutters or falters with any sort of awkward phrasing or weird adaptations. Hori and Miyamura sound like you would expect high schoolers to sound, and Engel’s work really lets their voices shine through.

If you’re looking for action or soap opera levels of dramatic romance, Horimiya definitely won’t be your cup of tea. But for a relaxing read with a steady, enjoyable story that does no disservice to the characters it puts forth onto the page, Horimiya is like a warm cup of cocoa on a crisp fall day.