I sat down to watch Kingsman in an empty theater right after lunch on a weekday. It was going to be one of those great cinema going experiences where you get the big screen and top notch sound system, but don’t have to worry about another soul in existence. Then a couple came in and sat directly behind me right as previews began to roll. They watched the movie with audible reactions: gasps, laughter, squeaks, and even an announcement of “She iscold” every time one character came on screen. My viewing experience was made all the better by their presence. 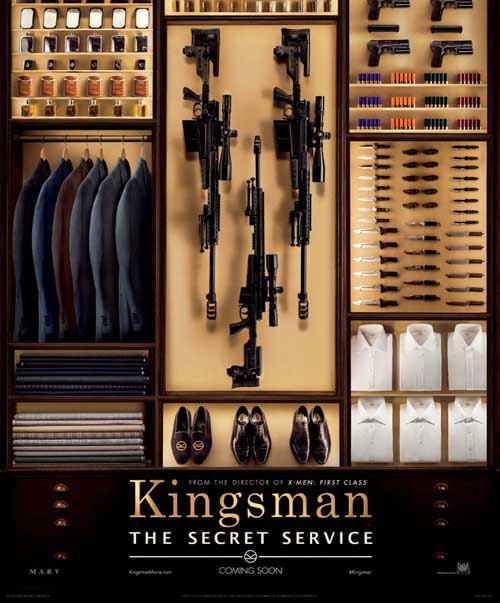 As Kingsman ramped up to its conclusion with a hyper-violent action sequence set to classic Southern rock, I realized that we were having very different (but equally enjoyable) experiences. I was laughing out loud while the couple was sharply inhaling their breath and mumbling “damn” to one another. We were in the same theater, but watching two very different movies. That’s the trick to Matthew Vaughn’s newest film. While it works on a very clear and obvious surface level, there’s something completely different happening just beneath that for anyone who cares to pay attention.

For the second time in his career Vaughn has added depth and intelligence to a comic adaptation from Mark Millar. On its surface Kingsman is a movie firmly locked within the super-spy genre, comfortably resting alongside the craziest antics of James Bond, Jason Bourne, and Jack Bauer. Action, gadgets, conspiracies, megalomaniacal villains, sex: It’s all there. Vaughn embraces the genre, but also manages to critique and parody it along the way. It’s a chiding hug, reassuring viewers that it’s okay to have fun at the movies, while pointing out the troublesome politics that reside in these sorts of romps. As much as the source material of The Secret Service is unintelligent, lazy, and obvious, Kingsman is smart, ambitious, and subversive. 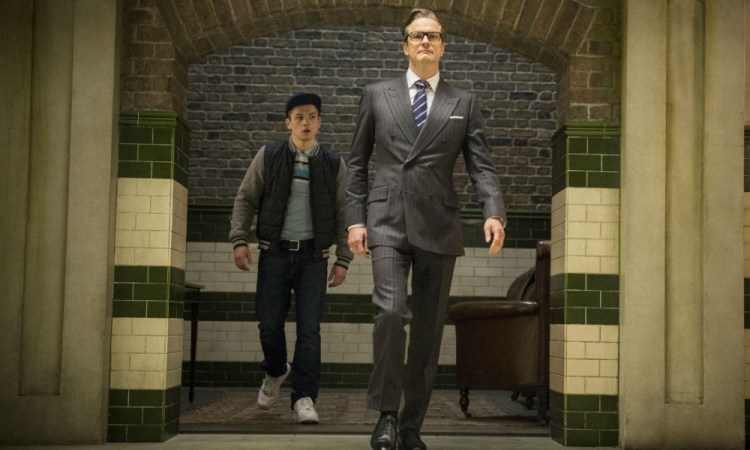 Kingsman centers around the Kingsman service, an independent group of posh spies who seek to maintain world peace. Each of the agents takes a codename from a Knight of the Round Table with Arthur (Michael Caine) leading them and Merlin (Mark Strong) as their gadget and weapons expert. When one of them is killed, they all bring in a potential replacement. This is how Eggsy (Taron Egerton, who we can only hope to see lots more of in the future), a well-meaning but delinquent youth, is brought into the organization by suave spymaster Harry Hart a.k.a. Galahad (Colin Firth, who is simply superb). In addition to his training and competition with the Elite of Britain, Eggsy must also contend with a massive globe-spanning conspiracy led by tech mogul Valentine (Samuel L. Jackson).

There are plenty of elements within Kingsman that my generation of writers (fresh out of college and extra wary of privilege) would probably deem problematic. The central conflict lies between a group of wealthy, white British men working as super spies and a powerful, self-made black man and his female Algerian assistant attempting to enact an insane scheme. On the surface it’s a reinforcement of so many things that are wrong with the status quo of pop culture. Vaughn isn’t unaware of this though, and to write off the film as racist, classist, or sexist on the premise alone would be to ignore what is actually being said. Rather than swerve away from this all too common setup, Vaughn leans into the curve. In the process he makes these roles obvious and draws attention to the problems that lie within them. 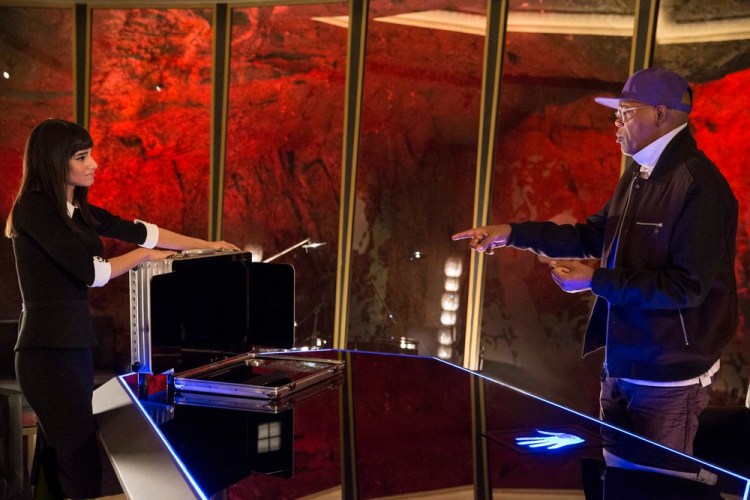 The characters within Kingsman are all exaggerations, big exaggerations, but they do not go so far as to fall into the realm of caricature. Samuel L. Jackson comes the closest to this in the villainous role of Valentine. A lisp and extreme aversion to violence are played for laughs, but Jackson still manages to summon an air of menace and odd humanity. His personal assistant, the deadly double amputee Gazelle played by Sofia Boutella is vastly more interesting though. She emanates everything that is amusing with a classic Bond henchman like Odd Job or Jaws with her razor-bladed artificial legs. Yet she plays the character with a depth and personality that prevents the role from becoming too cartoonish. Her confidence, gusto, and warm scoldings of Valentine all belie a complete human being.

Vaughn does far more than exaggerate standard genre fare in order to cue readers into the subtext of Kingsman, he actively winks and nudges them throughout the film. One of the very first things Eggsy does is to save a cat. For anyone familiar with writing and film, it’s a wink to the bestselling book on screenwriting Save The Cat! The central concept at play is that in order to easily make an audience like a film’s protagonist all you have to do is have them save a cat at the beginning of the movie. The reverse of this idea is that to make a character villainous, you simply have them do the reverse and kill an animal (another easy concept that Vaughn also doesn’t mind using). In this moment Vaughn isn’t being lazy, he’s grabbing film buffs by their collars and making it clear that he is perfectly self-aware.

These sorts of stabs at Hollywood and genre films are loaded throughout Kingsman, but in such a way as to swim just below the surface like a shark whose fin only occasionally crests through the water. Oftentimes the most obvious jokes manage to play on both levels simultaneously. At one point Harry Hart sits down to dinner with Valentine. It is a lavish spread of wine and cutlery, but the meal itself is unveiled on a silver platter as McDonald’s. This may seem like a goofy bit of eccentrism from Valentine, but both Firth and Jackson play the scene so wonderfully straight that it is clearly parody. As they discuss wine pairings for a Big Mac or double cheeseburger, they take hold of this product placement with both hands wrapped firmly around its throat. By lauding so much praise upon McDonald’s, they serve to mock the concept of placing obvious corporate brands within a blockbuster.

One element that ought to work for all viewers in a similar fashion is the action. While it may glean varying reactions ranging from shock to amusement to laughter, it is all very well shot. Vaughn is still refining his craft with the camera, but has grown considerably since the action sequences in Kick-Ass. Here he is much more assured and the fast pace and clear storytelling of bar brawls and savage 100-man battles alike show that. Whether you perceive them as simply intense action beats or clever plays upon the violence-saturated films of Hollywood, they are an absolute thrill to watch. 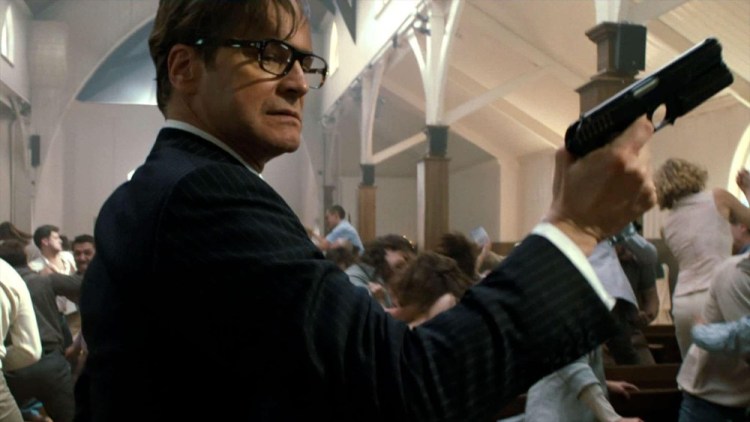 Kingsman isn’t a perfect film. There are moments where the jokes fall flat or veer into unnecessary crudeness. The last joke before the credits was bad enough to almost ruin the positive afterglow of the entire experience. Vaughn sometimes stumbles when leaping between disparate tones of humor and pathos. There is a message about class and the ability for any man (or woman) to become a gentleman that is not fully fleshed out. At the end of the film, it feels like a tacked on warm message that doesn’t quite jive with the politics of reality. Eggsy may have overcome his poor beginnings, but has still abandoned the rest of his class to the status quo after all. Those rough edges are far less common than the film’s many successful scenes and achievements though. No matter what nits I found to pick during the movie, I found myself quickly forgetting them as I marveled at the ambition and smarts on display throughout the rest of the adventure.

As we left the movie theater, I could tell that both the couple behind me and myself were thrilled with what we had just watched. While I mused over my own thoughts, they talked and laughed over favorite moments. We may have been watching two different movies, but we shared the same theater and experienced something that seemed to resonate with all of us. That may be Vaughn’s greatest achievement in Kingsman. He has made a movie that is accessible to two very different audiences. There is no disdain for high falutin’ movie critics like myself or viewers who simply want to relax for two hours. Instead he has infused a fast-paced super spy flick with intelligence and humor that so many blockbusters lack. Kingsman shows that a fun, genre movie need not lack in wit or complexity.