Gulag Casual is a work that wildly fluctuates between being stunningly obtuse and wonderfully accessible in wholly original ways.  And I think almost all of the discussion of the work (or at least all of the discussion that is fruitful or interesting) can occur without us getting too bogged down in the overlap (or lack thereof) between the world of fine art and the world of picture stories.  Still, some adjacent to him are keen to point to English’s work as occurring at some informative intersection of this kind.
I’m not sure whether such an intersection actually exists, but if it does, it’s hardly informative.  It’s pretty clear from listening to English gush about comics and from looking at the works within Gulag Casual that when English sets out to create a comic he’s not just throwing together stuff from a gallery exhibition and adding words.  English puts a lot of thought into composition, into fitting beats together, and into pacing his stories visually.  Talking about Gulag Casual is not difficult because English is “from the art world” or something; it’s difficult because his drawings are fucking weird and, often, in weirdly different ways.
“[I]t’s my belief that comics can sometimes be viewed as webs of images that carry some kind of emotional punch for standing on the page together. […] The narrative is what generates the images and it remains intact as the images change.” – Austin English
English’s stories don’t hinge on inciting moments, plot twists, or denouments; rather, they hinge on the shape of a concept or the visceral, visual-equivalent of a story beat’s impact.  The result of this fact is a good reprise of my overall impression of the work: English simultaneously pushes the boundaries while, in other places, failing to present something with enough shape or substance to feel like much of anything.  The latter cases are still cases where many of the glowing descriptions of English’s work ring true, but those glowing descriptions remain just that: descriptions.  I’ve heard his work compared to chicken falling off the bone, I’ve seen it called gelatinous, and it’s been pointed out that it raises questions about how shapes can manage to advance a narrative and evoke feeling.
That’s all fine but… is it… is it good?  Does that work?  Everybody talking about this work does their best to pick an angle, to pick something about the visuals that was effable to them and to then take those adjectives and charge up hill as fast as they can towards some type of meaningful evaluation of the work.  For what it’s worth, I think that’s pretty much all we can ever really do when talking about art, especially when it challenges us; but, at times, I still feel like anything resembling a typical comic vocabulary is being abandoned in confronting this work.
And here’s another thing: what is “this work” exactly?  When we talk about Gulag Casual, we are talking about a radically different series of stories.  English’s style undergoes an extreme transformation from one set of stories to the other, and the result is not only a substantial aesthetic difference but a major difference in both the readability and the effectiveness of the stories as stories, particularly insofar as they are visual narratives.
“[‘Freddy’s Dead’] is … the story where I started using Caran d’Ache pencils, which I use to this day — maybe it’s only visible to me, but I feel like my drawing really changed starting here.  I look back at ‘Disgusting Room’ and love those images and always want to try to go back — but something about using this specific new material pushed me in another direction. […] [F]or most people my drawings are still crude and outlandish, but to me they seem so solid and less scattershot now, and that starts with ‘Freddy’s Dead’.” – Austin English 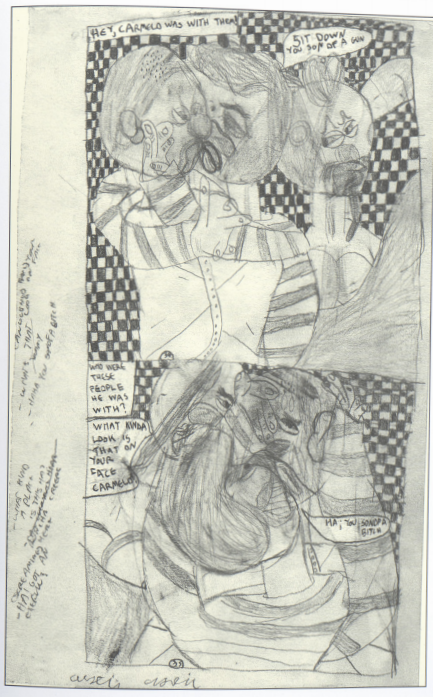 Reading through the back matter of Gulag Casual I was immediately struck by English’s own acute awareness of the way he had changed as an artist.  It might seem that any artist would notice a shift had occurred when it was this dramatic, but English gives an impression of penetrating self-awareness throughout his comments.  As I’m reading his thoughts, I think, “yeah, you changed pencils; but, something else happened when you started using them:” something he himself acknowledges in the very next sentence.  I think all of this is important to notice: Gulag Casual is best understood on the whole as an exploration of a change that occurred in English’s own work, and how that change belies what works well for him and what doesn’t.
Each of these stories shares quite a bit with the other.  They are stories about queerness, about strangers, about families and friendships falling apart, about loneliness, and each has these themes not impinged by the images but defined by their offbeat pace and unusual shape. 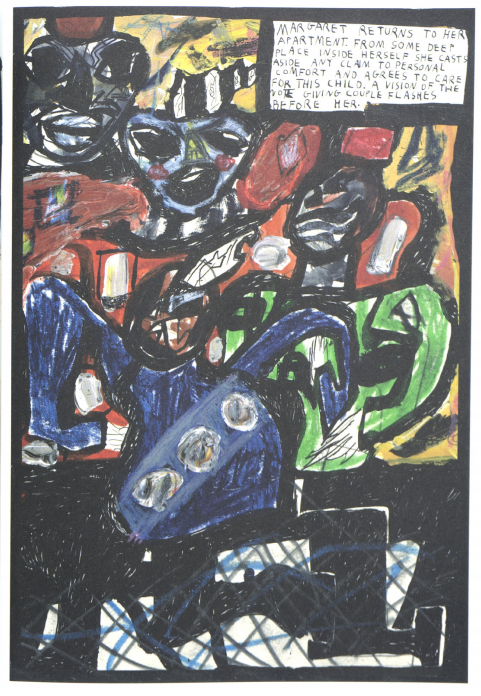 In “Disgusting Room” I find no insight, no reflection, and nothing to get lost in.  Flipping through pages I feel frustrated by all of the things and people I cannot identify.  I stare blankly and desperately want to focus in on something but all I have are empty words that are part of a story that itself is indiscernible in its narrative structure.  Is frustration an aesthetic experience? Maybe. Is detachment from experiencing the art itself an aesthetic experience? Probably not.
“A New York Story,” by contrast, succeeds in using its absurd imagery and dialogue to usher the reader through regret and loss in unexpectedly poignant and even comedic ways.  Regret is necessarily a means by which people alienate themselves from others.  When we dwell on our regrets, particularly things like missteps we took with friends that are no longer with us, we reach a point of narcissism apparent to anybody on the outside looking in.  “A New York Story” will strike a chord with anybody who has either had a friend who was too sensitive or has otherwise wronged a loved one who is no longer in their life.  It takes the perspective of others (in many cases but especially in cases of debilitating regret) to snap us out of it. 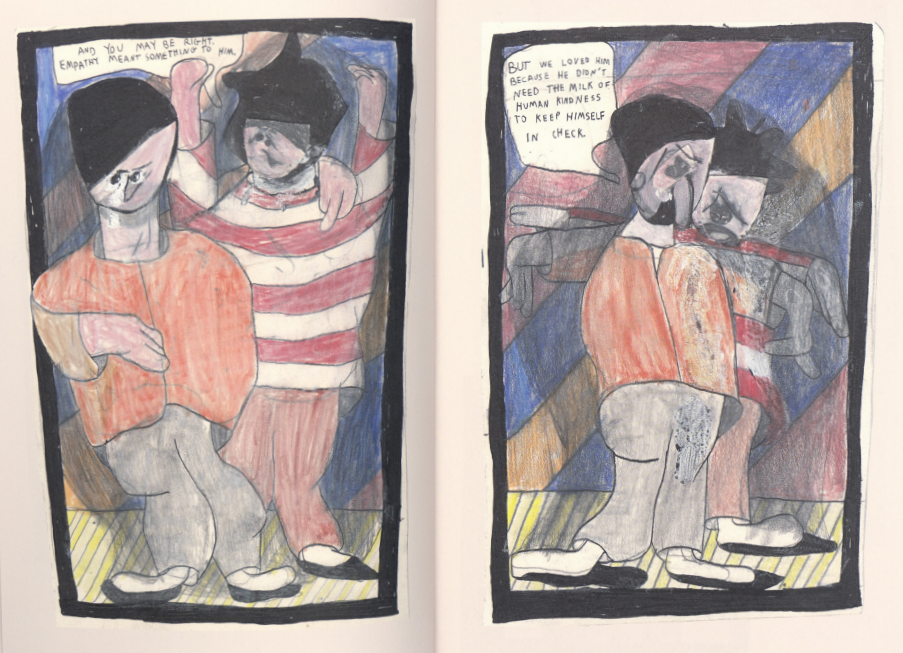 Going through that process–the process of realizing that your own self-abuse is committed selfishly and in bad faith on behalf of somebody who you no longer are able to lean on–is like experiencing a beating.  You will feel assaulted by those who try to help you, they will appear as aggressors, you will feel beaten to an emotional pulp and are apt to blame them.  “A New York Story” is English at his best specifically because he can confront these harsh emotional truths in single panels by helping himself to sudden, scary, almost clown-like transformations of the his characters.  A more traditionally crafted comic would have to rely much more on subtext in order to deal with these kinds of feelings, and I doubt it would have much success in such short order.
My favorite sequence in the entire book occurs at “A New York Story’s” end, when the main character, trying to disabuse himself of his selfish ways, takes up an awkward, panel-per-page ballet, ending up crumpled on the ground, asking “how’m I doing?” 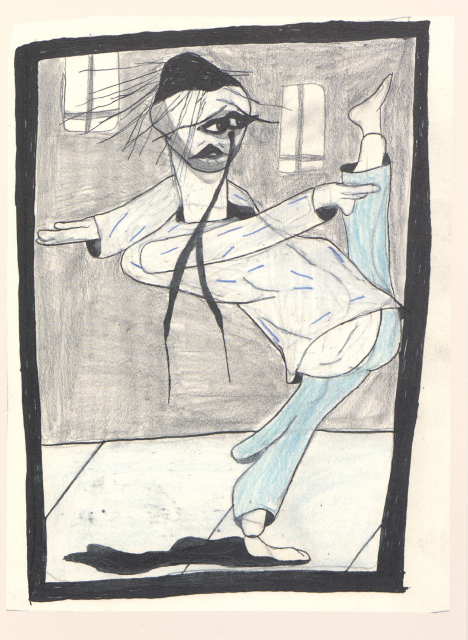 And tangling with Gulag Casual, I can sympathize with feeling as if I am just dancing around aimlessly and ending up flat on my face.  Perhaps more than anything, Gulag made me ask myself what it is that I want from reading a comic.  On one interpretation of my reactions to this work, what I want is meaning; but that’s not quite right.  Even if “A New York Story” left its impression on me, my interpretation was almost certainly just one of many.  The closing story, “Freddy’s Dead”, is similarly engaging despite being much harder to pin down in terms of its content. 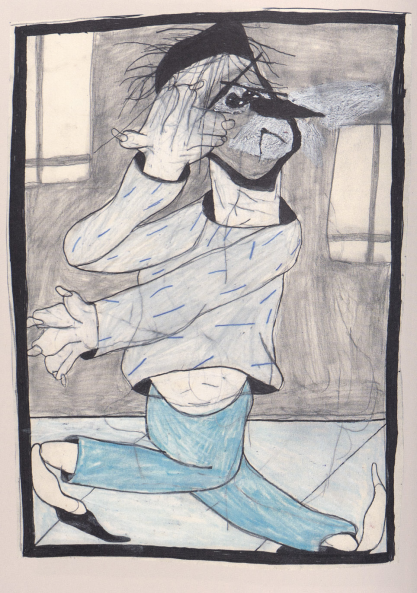 When English veers towards what could pass for absurdist autobiography, it still only feels right when the images are at least discernible.  Around the time he starts using the Caran d’Ache pencils he spends less time making the scenes ubiquitously loud and pours far more energy into transfiguring the human form.  You can witness this change beginning in “My Friend Perry” and really crescendoing for the first time in “Freddy’s Dead.”  Further, things feel more tangibly unfamiliar, or grotesque, or obscene, or absurd not only when English’s pencils are themselves more clear, but when they at least stand in some sort of clearer relation to one another.  When I have at least some idea of how we get from one image or page to the next in a given story, I can suss out that story’s general shape. 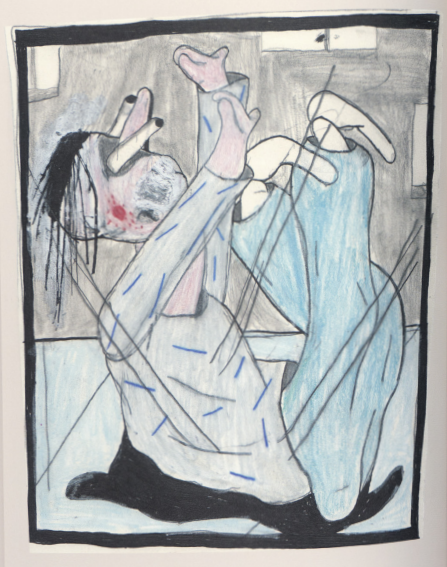 And hell, maybe the shape of “A New York Story” is as wobbly and hideous as some of the images themselves; but it does have some shape sturdy enough for me to hook into and navigate its syntax.  That’s really the biggest barrier between “fine art” and “comics,” isn’t it?  Hang a bunch of comics pages in a gallery, and you’ve got art, but throw a bunch of pieces of art together, and you’ll have to get really lucky to end up with a comic.  By letting the process of image-creation backseat-drive the narrative, English ends up breaking a lot of rules.  Sometimes, that breaks the stories themselves.  Other times, English’s experimentation doesn’t drag you towards the fine art world; rather, it drags you deeper into your expectations of the comic form.
Is that… good?  Does that work? 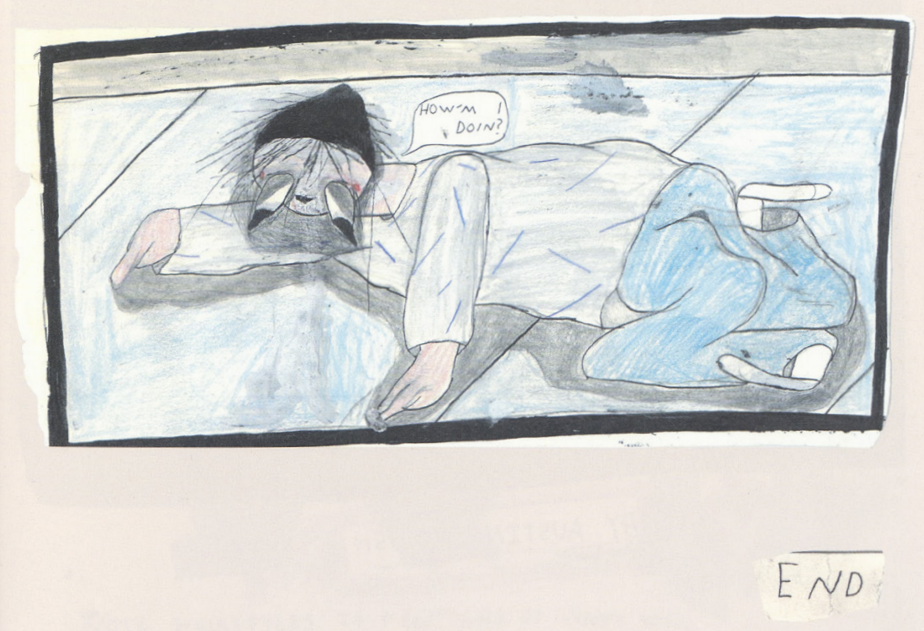