Jordie Bellaire has been all up in your comics. You may not know it, but she has. Unless the only comic you’ve been reading is Batman: Black and White. She wasn’t on that one.

A small sampling of Bellaire’s work in 2013 would include Ultimates event book Cataclysm, The Manhattan Projects, Zero, Pretty Deadly, The Massive, Three, and Quantum and Woody. The hardest working colourist in comics? Quite possibly, but however impressive a creator’s work-rate may be, quality counts. Which is not a problem, as Bellaire colours always, ALWAYS, pop. Whether it’s the blue/red motifs of Manhattan Projects, the deliberately muted world of Mara, or the near-hallucinogenic world of Zero, she has a talent for the vivid. You can debate whether Bellaire and others like her have leveraged the trend towards background-less art, annexing the unadorned backdrop as a canvas for their brand. You can debate it, but you can’t dispute the effectiveness of her colour choices in pacing, mood, and making comics locations both real and unashamedly… comic-y. Part of a generation of colourists freed up by the creator-owned explosion, Bellaire has been a strong proponent of colour as more than the colouring-in many superhero books seem limited to, presenting the colourist’s work as colour art in its own right, symbiotic with the artist’s mark-making. After all, the worlds in which our favourite stories take place are made of ink and paper, so why not embrace that and escape realism’s tyranny? 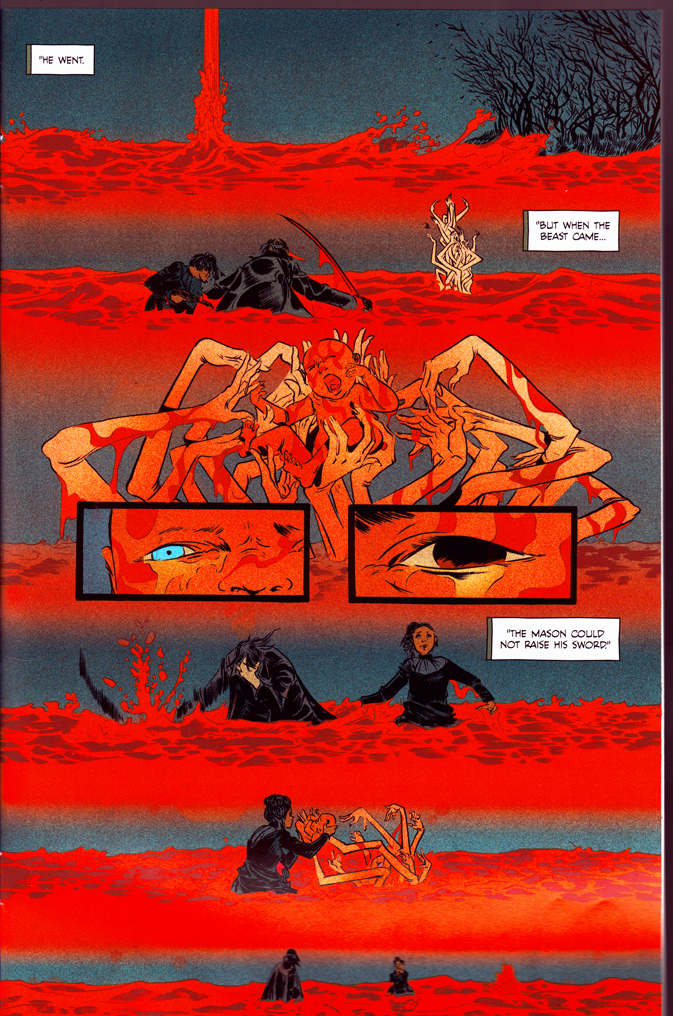 Bellaire’s advocacy, however, extends far beyond her work on the page. In early 2013, having been informed by an unnamed convention that she would not be listed as a guest, since colourists didn’t get listed, Jordie took to her blog, and created #ColoristAppreciationDay. Way to call bullshit on some retrograde convention thinking, and stay classy at the same time. Actions like this are what educate both fans and organisers, they advance a holistic understanding of the medium which can only enhance enjoyment. Progressive, y’all!

This is the single best-looking comic Brubaker ever wrote, and although credit must go to Steve Epting for some career-defining work, it’s Bettie Breitweiser who brings Velvet home. Given the Bond-referencing Moneypenny-as-badass plot, going with a 70’s laced aesthetic made sense, hence Velvet’s ride (an E-Type), glamorous grey-streaked mane, and the formality of Epting’s layouts. But it was in the colours that the nuances, the details that make a familiar premise live, were elucidated, and Epting’s strokes given atmospheric counterweight.

See how the background lighting bleeds into the panels, depicting distance or proximity faithfully, while also lending a “permanent sunset” romance to this 70’s assassination flashback? Breitweiser takes what could essentially be a monochrome comic, suffusing it with artificial hues realistically applied. The result, especially in flashbacks, is an improbable balance of romance and starkness, perfect for a world in which fear and a certain reserve are conditions of life. As far as Velvet herself, Epting’s lines are clean and strong, perfect vessels for Breitweiser’s evocative fills. Templeton’s emotions, hinted at in Brubaker’s dialogue, come alive in the interplay of Epting’s body language and Breitweiser’s colours, a sophisticated approach that lets the reader in without compromising Templeton’s stiff upper lip.

Breitweiser also took over on Fatale in 2013, around the same time Brubaker and Phillips cut loose from their original plans, opting to freewheel though Jo’s irresistible history, one damned lover at a time. Filling colouring legend Dave Stewart’s shoes, Breitweiser found modulations of Fatale’s established noir feel, slotting into one of the tightest-knit and longest running partnerships in modern comics without ever missing a beat. The result is that Fatale’s travelling nature, Jo’s migration though different cities and decades, becomes as a darkened mirror to her surroundings, local colour filtered through heavy inks and the murky shadows of her curse.

These aren’t the only projects Bettie worked on in 2013, but they’re standouts for the subtlety and refinement with which she approached them. With the five-year movie studio-style contract Brubaker & Phillips just signed at Image, one can only hope that we’ll have more opportunities to praise her.

Comic book colorists belong in the same camp as film editors. Each pulls the curtain so the viewer doesn’t see what goes on behind it. It’s when the cut (the editor’s hand) goes unnoticed that the viewer falls under the spell of the film. Color in comics works a similar seam. The less one notices the better the colorist. In this analogy (albeit protracted) the Thelma Schoonmaker, the Verna Fields, and the damn Anne V. Coates of colorists is Cris Peter.

Peter hides in plain sight as well as any colorist because she intuitively knows she is as responsible for telling the story as anyone on the creative team. The best colorists arrest by degree (gradient?) and work in subtlety — oh, the irony. Peter has worked on several comics this year. The two where I noticed her work (or didn’t, nudge, nudge) was Marvel Knights: X-Men and Hinterkind.

Despite its atavistic cityscapes and curious premise, the art and the dialogue of the first issue of Hinterkind left me wanting. Oddly (?), the one thing I remember liking was the color palette, the greens held the lushne
ss of high summer and the sky looked like it was inspired by a Maxfield Parrish painting. When I saw Peter’s name in the credits, I wasn’t surprised why my response was so strong. Such is the stealth of an assassin like Cris Peter.

Seeing Marvel Knights: X-Men — Peter’s name was second on the bill to writer/artist Brahm Revel so even a dumbass like me couldn’t miss it — makes me want to go on a Cris Peter inspired drug trip. The story riffs off the old school undocumented-mutant-of-the-week plotline. To cope, these new mutants self-medicate with pills, I imagine its some backwoods bathtub meth. Peter’s colors float on the page and give Revel’s chunky lines a lightness of being. It reminds me of how Christie Scheele colored the American flag on Nuke’s face for ‘Born Again.’

Peter’s art adds texture, substance and influence to this story, but it’s subtle. So much so, it’s easy to slip beneath the waves and to be carried away by the story.

No one is going to argue that Dave Stewart belongs on any list of best colorist.  Best of 2013. Best in the history of comics. The King of Colors gets continuous praise for his work, and deserves every word of it.

Dave Stewart applies his colors with deft skill, setting the mood of every page. Instead of just pounding your eye with bright colors, he gently paints in neutrals for maximum effect. And his work demands closer attention to the page; I once thought a comic he was working on was on the muddy side, but when I looked closer I saw the subtleties and shades of neutral color he was layering in

My favorite Dave Stewart comics are Hellboy in Hell and Baltimore. In both series, he creates a grim, dark world where the only colors come from the fires of the corpse-burning furnace and the blood-red glow of the vampires’ eyes.  The sun rarely shines in Dave Stewart’s world, and he has vowed never to color a sky blue. I am in awe of the guy and how he can boost the drama with simple color choice. Or lack of color, when the mood suits him. I have seen him leave some panels white for dramatic impact.

He also has the unenviable task of trying to forge some consistency between Brian Wood’s Carousel o’ Artists on Conan the Barbarian: Queen of the Black Coast. Every artist on that series swings in and pencils a story arc, then swings out, never to return.  Stewart showed his versatility on that series, changing his style to suite every artist, from the painterly work with Mirko Colak to the flatter style used with Paul Azaceta.

I often wonder how much of the amazing color work comes from the artists’ imaginations and how much is pure Stewart. I once had a comic artist tell me—off the record, so he/she shall go unnamed—that it’s an open secret that you can turn in mediocre work and Dave Stewart will turn it into something wonderful.  That’s just how the King of Colors rolls.

Jose Villarrubia colors a lot of comics, so I feel a little bad focusing on just one of his works. He colors Jae Lee, Bill Sienkiewicz, Paul Pope, Richard Corben, J.H. Williams III—a cavalcade of comics’ finest. He is also a collaborator with Alan Moore, and if you have ever wondered what difference a colorist can make to a series, check out Villarrubia’s Facebook. He does mini-classes taking an image from someone else and re-coloring to show what impact the application of color to black-and-white art can make.

But, I’m going to talk about King Conan: Hour of the Dragon. Because that’s where I have come to know and appreciate him.

Villarrubia’s colors are magnificent—ethereal and earthy at the same time. Like Giorello, he colors the entire page instead of just the panel, giving you a complete picture instead of parts of the whole. He favors strong, single colors and juxtapositions of vivid and grey for maximum impact that is unlike anyone else’s coloring I have seen. He uses light wash colors set against deep, rich purples and reds that just stand off the page. Then he colors dry, dusty deserts that make me want to grab a glass of water.

Villarrubia gets effects out of his colors that I haven’t seen any other colorist emulate. The eyes of Xaltotun owe their life to Villarrubia’s colors. And he gets some remarkable effects between the panels on the same page, like how the light shines on Old Conan’s face in a very different way than the younger version beneath him.

And man, can the guy color fire. That kind of light is hard to pull off, but Villarrubia does it with style and skill. Bravo.