2000 AD is one of the most legendary comic series of all time. The British anthology series has helped to launch the careers of many of the industry’s greatest writers and artists, such as Dave Gibbons and Grant Morrison. The publisher is touting this week’s release, Program #2150, as the place for new readers to jump on. Given the publication’s track record over the years… why not?

This week’s issue of the Eisner-nominated anthology is the ideal time to start reading, with all-new stories! 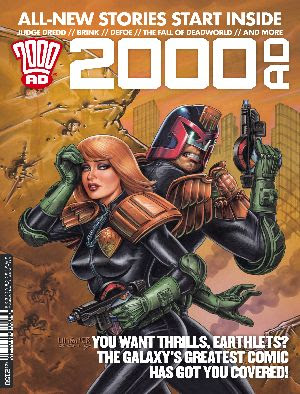 2000 AD’s latest jumping-on issue – Prog 2150 – is out this week and there’s never been a better time to pick up a copy of the Galaxy’s Greatest Comic!

Twice a year Britain’s greatest comic book export resets with all-new stories, giving new and lapsed readers the ideal point to give themselves a dose of Thrill-power!

2000 AD Prog 2150 is fit-to-burst with EIGHT thrilling sci-fi stories from some of the best writers and artists in the comics industry today, including John Wagner, Dan Abnett, Guy Adams and many more!

It also features the return of veteran 2000 AD artist Will Simpson (Game of Thrones) alongside the debut of new artist Stewart Kenneth Moore (The Tragedie of Macbeth) on Pat Mills’ Defoe.

Behind the new cover by Joseph Michael Linsner, a long-standing character meets their end in JUDGE DREDD and then there’s violent sci-fi sect crimes in BRINK, 17th Century zombie-vanquishing in DEFOE, occult noir in 1940s LA in HOPE, ssssssilver ssssscreen action in ANDERSON; PSI-DIVISION, desperate times and desperate measures in SINISTER DEXTER, and can the Dark Judges ever be stopped in THE FALL OF DEADWORLD?

2000 AD Prog 2150 is on shelves this Wednesday from all good newsagents and comic book stores in the UK and Ireland, and next month in North America with the monthly 2000 AD packs available from Diamond Distribution. It will also be available in DRM-free digital worldwide from 2000 AD’s webshop and apps for Apple, Android, and Windows 10 devices from midnight on Wednesday.

JUDGE DREDD // GUATEMALA
John Wagner (Script) Colin MacNeil (Art) Chris Blythe (Colours) Annie Parkhouse (Letters)
Mega-City One, 2141 AD. Home to over 130 million citizens, this urban hell is situated along the east coast of post-apocalyptic North America, Crime is rampant, and only the Judges — empowered to dispense instant justice — can stop total anarchy. Toughest of them all is JUDGE DREDD — he is the Law! Now, former Chief Judge Hershey has revealed that she’s dying from a pathogen, and is facing her final days…

HOPE // UNDER FIRE
Guy Adams (Script) Jimmy Broxton (Art) Ellie De Ville (Letters)
An alternate 1940s USA. WWII is over, victory having been secured by occult means. Now, magic is a part of everyday life, its practitioners commonplace. Mallory HOPE is one such skilled operative, though calling on the dark arts takes its toll on the user. He’s also a private investigator, hired for all manner of down n’ dirty jobs, and now his services have taken him to New York at the behest of an old army colleague…

BRINK // HATE BOX
Dan Abnett (Script) I. N. J. Culbrad (Art) Simon Bowland (Letters)
The late 21st century, and through environmental catastrophe and industrial overload Earth has been reduced to a wasteland. Mankind finally evacuated the planet in 2072 and millions were housed in a number of deep-space Habitats. But life on these cramped, overcrowded stations is tense, with many spilling over into madness — as HSD cop Bridget Kurtis has discovered in her investigations into violent sect crimes…

FUTURE SHOCKS // RESTRUCTURING
Karl Stock (Script) Will Simpson (Art) Annie Parkhouse (Letters)
Out in the vast reaches of the universe, there are an infinite number of stories waiting to be told. These cautionary tales pass from traveller to traveller in the spaceports and around campfires on distant planets, acquiring the status of legend, their shocking ends a salutory lesson in hubris. Anything is possible in these twisted trips into the galaxy’s dark side, so abandon your preconceptions, and expect the unexpected…

DEFOE // THE DIVISOR
Pat Mills (Script) S. K. Moore (Art) Ellie De Ville (Letters)
London, 1668. It is two years since the city was devastated by the Great Fire. From the ashes rose the undead, hungry for the flesh of the living. Protecting the populace are zombie hunters like Titus DEFOE, a former Leveller, who now makes it his mission to rid the capital of the ghouls. In this strange, clockpunk alternate past, supernatural entities have been passing info to humanity, enabling them to build rocketships…

THE FALL OF DEADWORLD // DOOMED
Kek-W (Script) Dave Kendall (Art) Annie Parkhouse (Letters)
The planet that eventually became known as DEADWORLD was once a regular civilisation existing in a dimension parallel to our own. But the end of days is coming, and creatures known as the Dark Judges are spreading their contagion, exterminating all life. While the survivors attempt to resist the undead horde, the neighbouring Soviets have seen the chaos as an ideal time to launch an attack on their enemies…