You know what’s awesome? Hellboy. Hellboy has been awesome ever since Mike Mignola debuted the character. And he continues to be awesome thanks to Mignola’s continued involvement in the character. You know what else is awesome? All star creative teams. Sure, you get the occasional flop (All Star Batman & Robin The Boy Wonder), but most of the time you get something great. That’s why this announced one-shot from Mignola and fellow Eisner winner Adam Hughes is so exciting. And based on the scheduled release date, it’ll make a great holiday gift for the comic reader in your life.

Check out the full press release from Dark Horse below.

MILWAUKIE, Ore., (August 27, 2019) – This December, the Eisner Award-winning creative team of HELLBOY: KRAMPUSNACHT is reuniting for an all-new one-shot, HELLBOY & THE B.P.R.D.: THE SEVEN WIVES CLUB. Written by legendary HELLBOY  creator Mike Mignola and illustrated by acclaimed artist Adam Hughes, this ghostly yarn features Hellboy coming to the aid of a young girl whose ghost hunt in Savannah, GA goes terribly wrong. Things go from bad to worse, as they often do, when a visit to an abandoned medical school reveals sinister layers to a grisly long-ago murder.

“The Victorians used to read and tell ghost stories during the Christmas season,” said Mignola. “We might not be reading by candlelight these days, but I do like a good ghost story during the holiday season, especially when there are stolen cadavers, vengeful spirits, and art by Adam Hughes.”

“I’m dead thrilled to be collaborating with Mike again and flabbergasted as always that anyone wants to work with me twice,” said Adam Hughes. “This one’s so spooky, I’m only drawing it during the daytime.”
Adam Hughes will provide both the main cover and a variant cover, and Mike Mignola will also provide a variant cover. Dark Horse Comics will publish HELLBOY & THE B.P.R.D.: THE SEVEN WIVES CLUB one-shot on December 11, 2019. 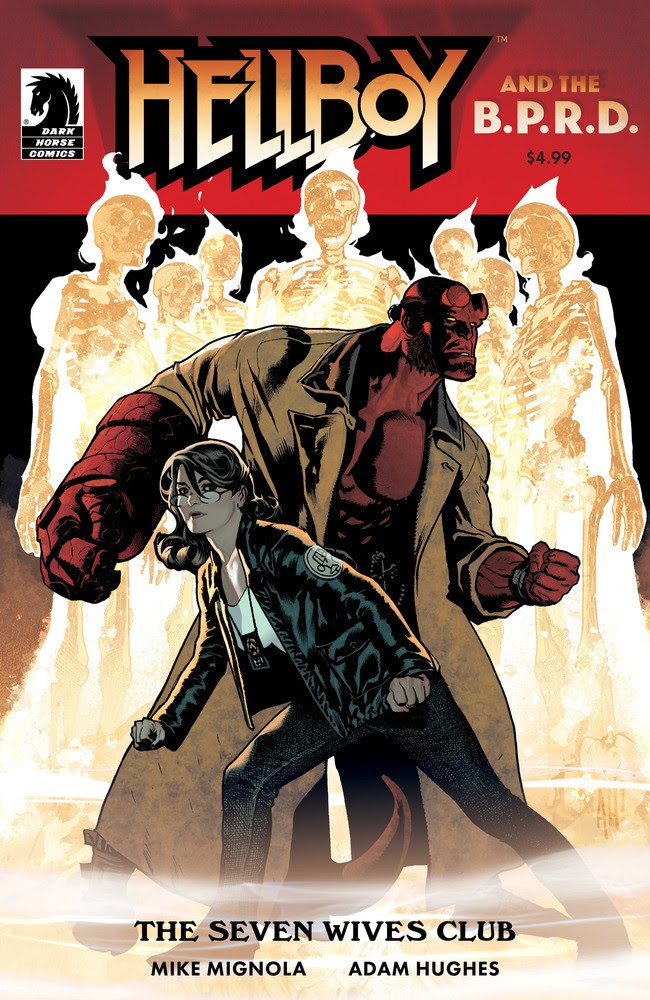 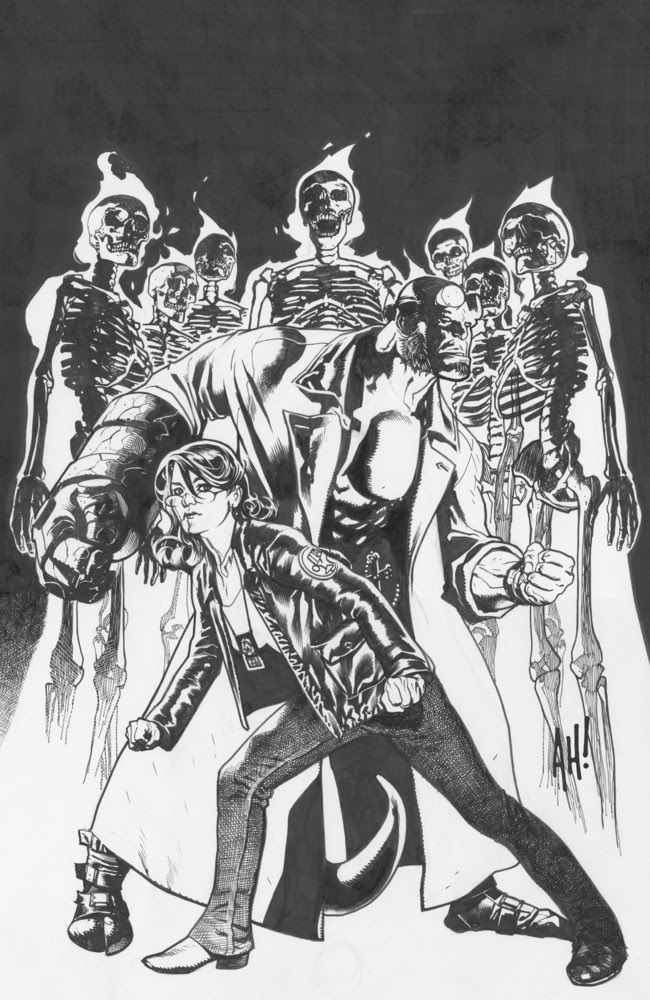 About Mike Mignola
Reading DRACULA at age 12 introduced Mike Mignola to Folklore and Victorian Supernatural Literature from which he has still never recovered.
He began working as a comic book artist in 1982, working for both Marvel and DC Comics before creating HELLBOY, published by Dark Horse Comics in 1994. What began as a single comic book series would eventually expand to a “Hellboy Universe” of related graphic novels, prose novels, short story anthologies and both animated and live action films. He also wrote and drew THE AMAZING SCREW-ON HEAD AND OTHER CURIOUS OBJECTS. He has co-written novels with Christopher Golden (Baltimore, or, The Steadfast Tin Soldier and the Vampire) and Thomas Sniegoski (Grim Death and Bill The Electrocuted Criminal), worked with Francis Ford Coppola on BRAM STOKER’S DRACULA, was a production designer on Disney’s ATLANTIS: THE LOST EMPIRE, and visual consultant to Guillermo Del Toro on BLADE II, HELLBOY and HELLBOY II: THE GOLDEN ARMY.
A new HELLBOY film directed by Neil Marshall was recently released.
Mike’s comics and graphic novels have earned numerous awards and are published in a great many countries.
He lives in Southern California with his wife and a very demanding cat.
About Adam Hughes
Adam Hughes is most commonly known for his stylized renderings of women: superheroines, damsels in distress, figures in fantasy. He is considered by many to be one of a new generation of Good Girl artists inspired by Petty, Vargas and Elvgren. When describing his own work, Adam has used the term “naturalistic” as opposed to the term “realistic”; which describes what he does perfectly.
Adam began working in comics at the age of 19, in 1985. In 1988 Adam lent his talents to a comic book called Maze Agency; a book that many consider to be his first real artistic “run” on a title. In 1989 Adam began working on his first “mainstream” comic book title: DC Comics Justice League. Adam’s recognizably strong and elegantly drawn women have graced the covers of four years worth of DC Comics’ Wonder Woman title, which was followed by four more years on Catwoman.
Today Adam is best known as a cover artist. He pencils, inks and colors his own covers, using both traditional and digital media. His work can be found in magazines like Imagine FX and Playboy and on trading and sketch cards for sets like Indiana Jones, Star Wars and many others.
About Dark Horse Comics
Founded in 1986 by Mike Richardson, Dark Horse Comics is an excellent example of how integrity and innovation can help broaden a unique storytelling medium and transform a company with humble beginnings into an industry giant. Under a new partnership with Vanguard Visionary Associates, Dark Horse is positioned to further expand its reach globally with publishing, products, and filmed entertainment. Over the years, Dark Horse has published the work of creative legends such as Yoshitaka Amano, Margaret Atwood, Paul Chadwick, Geof Darrow, Will Eisner, Neil Gaiman, Dave Gibbons, Faith Erin Hicks, Kazuo Koike, Matt Kindt, Jeff Lemire, Mike Mignola, Frank Miller, Moebius, Chuck Palahniuk, Wendy Pini, and Gerard Way. In addition, Dark Horse has a long tradition of establishing exciting new creative talent throughout all of its divisions. The company has also set the industry standard for quality licensed comics, graphic novels, collectibles, and art books, including Aliens, Stranger Things, Avatar: The Last Airbender, The Legend of Korra, Predator, Minecraft, The Legend of Zelda, Super Mario, Dragon Age, James Cameron’s Avatar, Game of Thrones, Mass Effect, StarCraft, The Witcher, and Halo. Today, Dark Horse Comics is one of the world’s leading entertainment publishers.