My Little Pony first came out in 1981. This franchise have their ups and downs. Hasbro relaunched this My Little Pony for the fourth time in 2010 with animated cartoon series, My Little Pony: Friendship is Magic , it became very successful.

The first comic book of My Little Pony: Friendship is Magic by IDW came out in November 1992. This comic book has 6 different regular  covers (Twilight Sparkle, Fluttershy, Pinkie Pie, Rainbow Dash, Rarity and Applejack). Twilight Sparkle cover is the more valuable comic book of the six. The first issue was a huge success with 100,000 pre-orders and there were second, third and fourth printings. 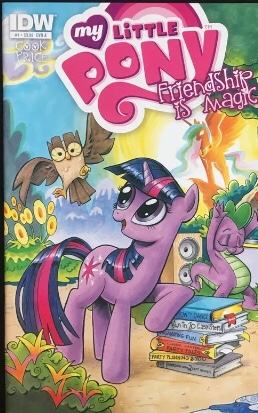 You won’t see too many issue 1 on ebay. Perhaps you can purchase them at BronyCon in Baltimore, MD from August 1-4.

Adult and teenage fans of the show are called Brony (Bro and pony combined). BronyCon started out in NY with 100 attendees in 2011. The show has peaked at around 10,000 attendees in August 2015 in Baltimore. Last year, they announced 2019 will be the last year.

I haven’t watched one episode of My Little Pony until I have a child. I have a daughter who loves this, she is teaching me all their names. Now with me writing a blog about My Little Pony, does that make me a brony?