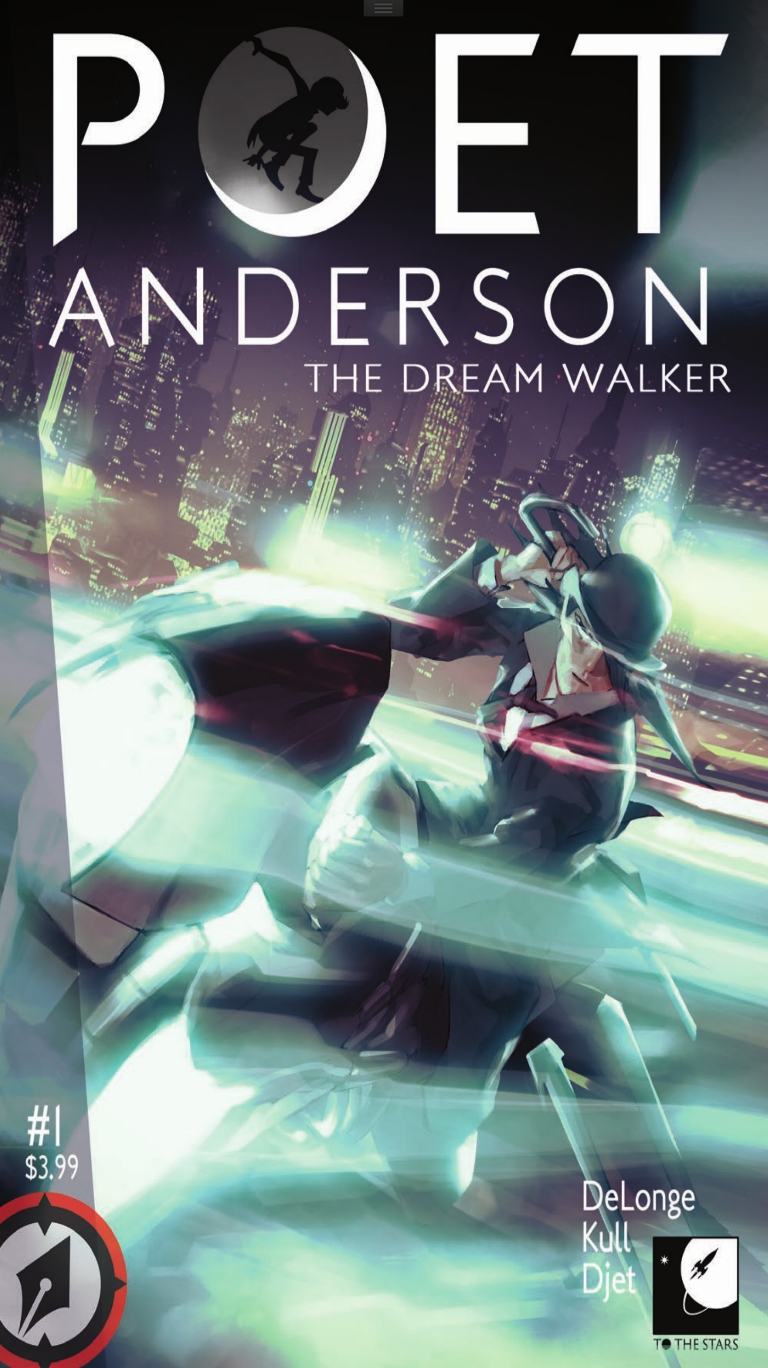 It is difficult to produce a comic dealing with dreams – specifically the realm within which dreams exist as physical, tangential things – without immediately invoking comparisons to Neil Gaiman’s Sandman. I would not say that Poet Anderson is, in any way, trying to mimic that seminal series. In fact, the most shocking thing comparing the two is that after reading the first issue, you could reasonable convince me that DeLonge was completely unaware of Sandman‘s existence. Where Sandman dealt with some fairly heavy themes, which aren’t really relevant to go into here, Poet Anderson is casting itself as a straight-up action-adventure, good-vs.-evil fantasy epic. Just know that if you pick this up expecting anything remotely similar to Sandman, you will not find it.

The story opens in the dystopian future. How do I know it’s the dystopian future, you ask? Why, because the existence of skyscrapers is happening concurrently with the high-fashion-ability of bowler hats, that’s how. Our protagonist, Jonas “Jojo” Anderson, has a quick chat with his dad (just enough to let us know that times are tough leading to overworked and absent parents) before heading home and meeting older brother Alan – who is into some weird stuff. He basically gets high and then trips balls in the dream world. But this is your lucky day, Jojo, because today you get to join him.

Anyway, they both fall asleep and Alan gives Jonas the (extremely quick) rundown of how the dream world works. He can do this because he, and his brother, are special – they are “lucid dreamers,” and can recall their past dreams as well as influence their current ones. They meet up with sexy dream girl, Ayo, who is having her soul drawn from her body (as in sucked out of) and then said soul is tattooed on her skin (don’t ask, because I didn’t really understand that part either.) I’m not sure she qualifies as a “manic, pixie, dream girl,” but she is literally a dream and ostensibly a girl, so she’s halfway there.

They go off adventuring because Ayo wants to see rain and the closest thing they’ve got is a distant waterfall. It’s left unexplained why it doesn’t actually rain in this dream realm. I suspect there actually is a reason, but we’re not given it here.

Enter antagonists: “Night Terrors,” “Night Stalkers,” and the big, bad guy himself: “REM.” Get it? Our heroes are captured, but quickly saved by one of the warriors of this world: a “Dream Walker,” who tells Jonas that he’s extra, extra, super special, and can just wake himself up out of the dream, because he’s what they call a “Poet.”

Jonas wakes up, implies that he’s finally truly awake, and the issue ends.

All in all, the most I can really say about this is a noncommittal shrug. It wasn’t bad. It wasn’t great. I can see potential in it, but this issue felt incredibly rushed, as if someone said, “I want precisely one issue of character establishment/world building/stakes setting/etc. More than that and we’re just screwing around here.” That isn’t to say that those things don’t happen. This dream world clearly has rules – one of the characters remarked that they had to steal bikes to get somewhere – they couldn’t just fly: “This is Dream World, not Fantasyland.” I get the sense that this is a fully realized world, just that the author doesn’t think the reader needs to know or care about the details. Unfortunately, that’s also pretty much how I feel about this comic – not needing to know or care about it.

As a side note: one of the oddest things about this book is that it is billed as being “From the imagination of Tom DeLonge.” If you are unaware of how that is, you probably weren’t in high school between, oh, let’s say 1998 and 2004. DeLonge was the guitarist for the band Blink-182; and if you’re still unfamiliar, they were the band whose most prominent video involved them running around naked and whose most well-known albums are titled Enema of the State and Take off your Pants and Jacket (and if you don’t get that last one, write down those words on a scrap of paper, hand it to a stranger, and politely ask him to read it to you.)

Now, I have absolutely no problem with the man wanting to branch out and get into comics – be it through writing directly or through collaboration with more experienced, established writers; but it does seem off that they’re treating that phrase as “From Executive Producer Steven Spielberg,” when it really is a lot more like “Based on a doodle by Chad Michael Murray.” I mean, sure. Fine. It’s not hurting anything by any means, but I would be absolutely flabbergasted if that phrase alone was bringing in readers.

Overall, I thought it wasn’t good, but not bad. Perfectly serviceable in every way.