Home
Indie
Image
While Image Comics’ Spawn recently celebrated milestone by becoming the longest-running, independently published comic, it is Savage Dragon’s upcoming Issue #250 that is more impressive. Completely written and illustrated by creator and Image co-founder Erik Larsen, Savage Dragon has benefited from being under a singular creative vision, and as a result remain a highly enjoyable, albeit low-selling title. Larsen’s vision has seen the characters age in real-time, a feat that corporate comics – especially the Big Two – are very averse to (5G rumors at DC not withstanding). In celebrating this feat, a couple new variants have been announced, one by yet another Image co-founder, Rob Liefeld, and the always entertaining Scottie Young.

PORTLAND, Ore. 02/24/2020 — Image Comics is pleased to reveal jaw-dropping Rob Liefeld (Deadpool) and Skottie Young (Middlewest, I Hate Fairyland) covers for the highly anticipated Savage Dragon #250. This milestone issue of the long-running, creator-owned series by Image Comics partner and CFO Erik Larsen will make waves at comic shops in May 2020.

For 28 years, Erik Larsen has chronicled the lives and times of the Dragon and his extended family in one of comics’ only series set in real time. This monumental oversized milestone issue is a sweeping culmination that sets the stage for the next phase of comics’ most uncompromising series with its most shocking story yet!

Forces have conspired against Malcolm Dragon and his family—but is this a turning point or…THE END?! Find out as Savage Dragon becomes the second original Image title to reach its 250th issue and begins the countdown to #300.

Savage Dragon #250 will be available at comic book shops on Wednesday, May 20. 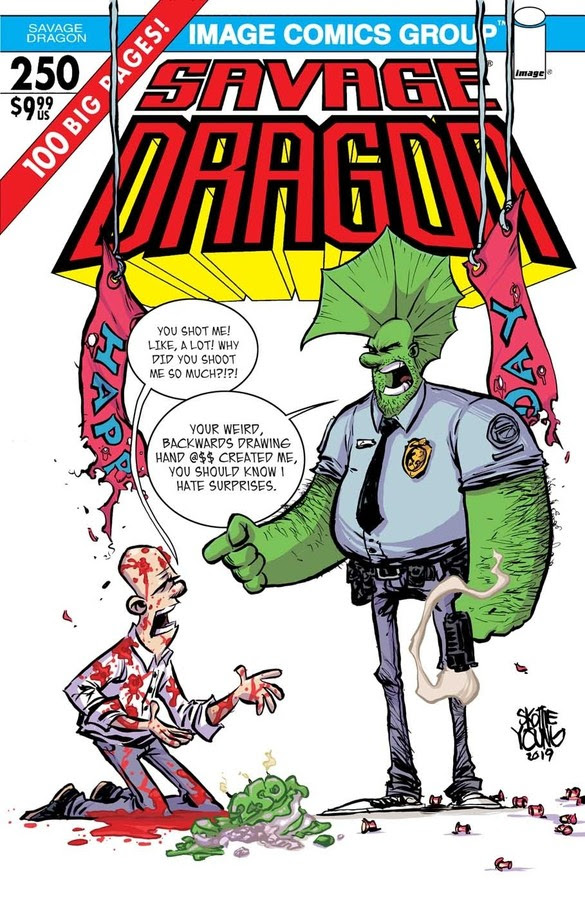 “Erik’s a god; tell him for me. He’s like super-meta. He’s taken on all the changes in comic books. He’s like, f*cking done stories about it. He’s brilliant.” —Grant Morrison

“A lethal combination of talent, drive and discipline. I won’t see another run like this in my lifetime.” —Rob Liefeld

“Energetic, inventive, surprising and most of all, fun. No matter what Erik does, he does it with the pedal to the metal.” —Kurt Busiek

“The greatest superhero epic ever published. If you enjoy comics and you haven’t read Dragon, you screwed up… but it’s never too late!” —Robert Kirkman

“The most consistently innovative and outrageous book in the history of our great medium. Erik Larsen is the boldest example of the spirit of Image comics.” —Chris Burnham