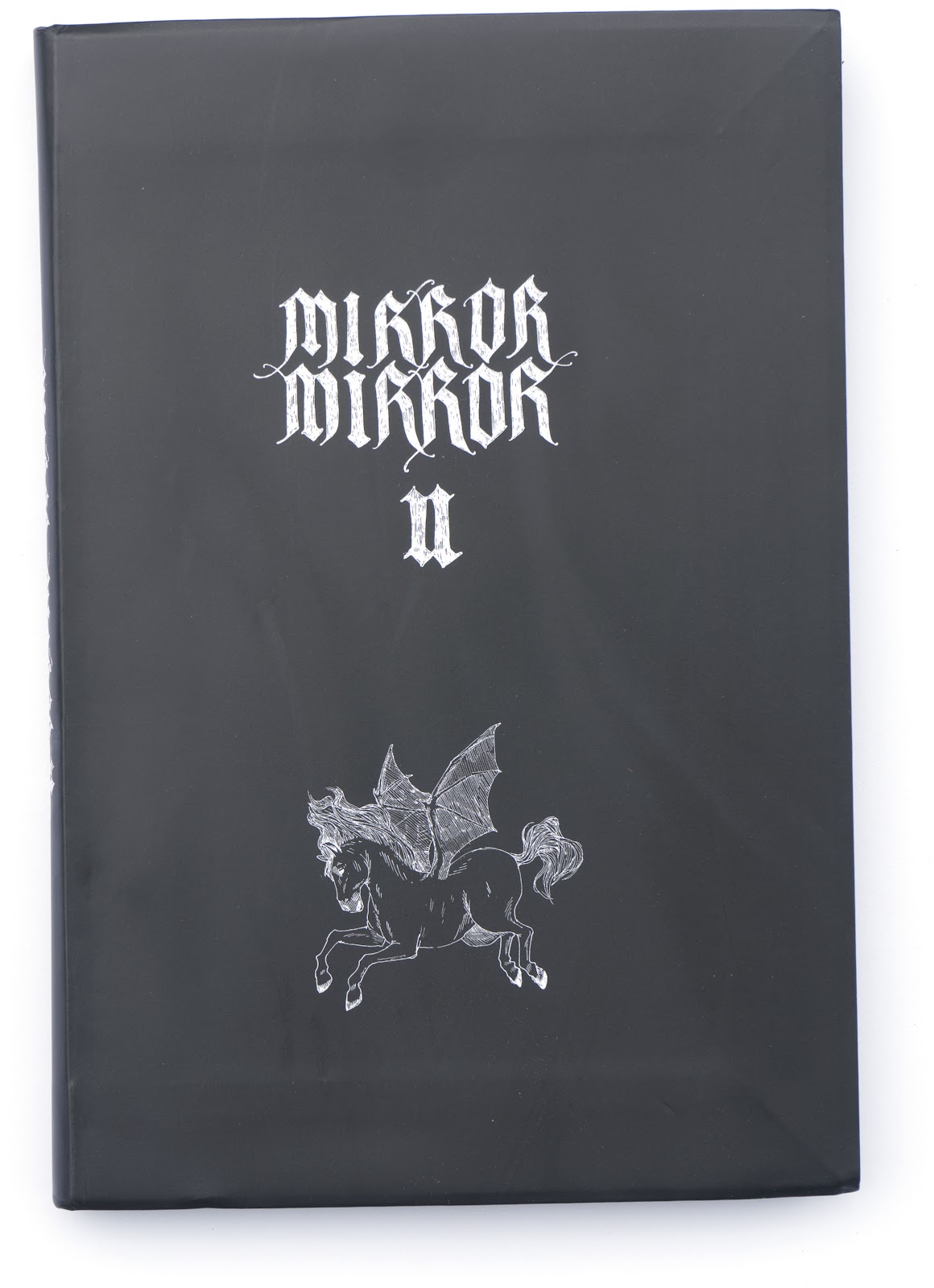 Watching things break teaches us the reasons that we love them.
When I was younger, I practiced vipassana meditation.  Unlike my current zen habit of ‘just-sitting’, vipassana asked me to contemplate the true nature of reality by focusing on certain images that would help bring me closer to truth.  One of the pertinent images that drove the Buddha towards the path of enlightenment was that of a corpse. But when you haven’t really seen a corpse that wasn’t pumped full of embalming fluid and dressed up for you, there is some serious detachment from what it really means to see inside of Death.  Still, I think those hours spent drumming up morbid-but-hollow imagery were the closest I had ever gotten to actually thinking about The Abject.  And I would argue it is only about as close as a S.I. swimsuit cover could take you to thinking about the truly erotic.

And while my girlfriend probably isn’t thrilled about the idea of watching Hellraiser, Mirror Mirror II brought at least one more person to the altar of fiction which rends flesh. Prior to this anthology, my interest in horror media generally was almost exactly ZERO.  Felker-Martin’s prognosis for the reader gave me pause: “What you’re about to read will hurt you.” Why in the fuck would I want that? 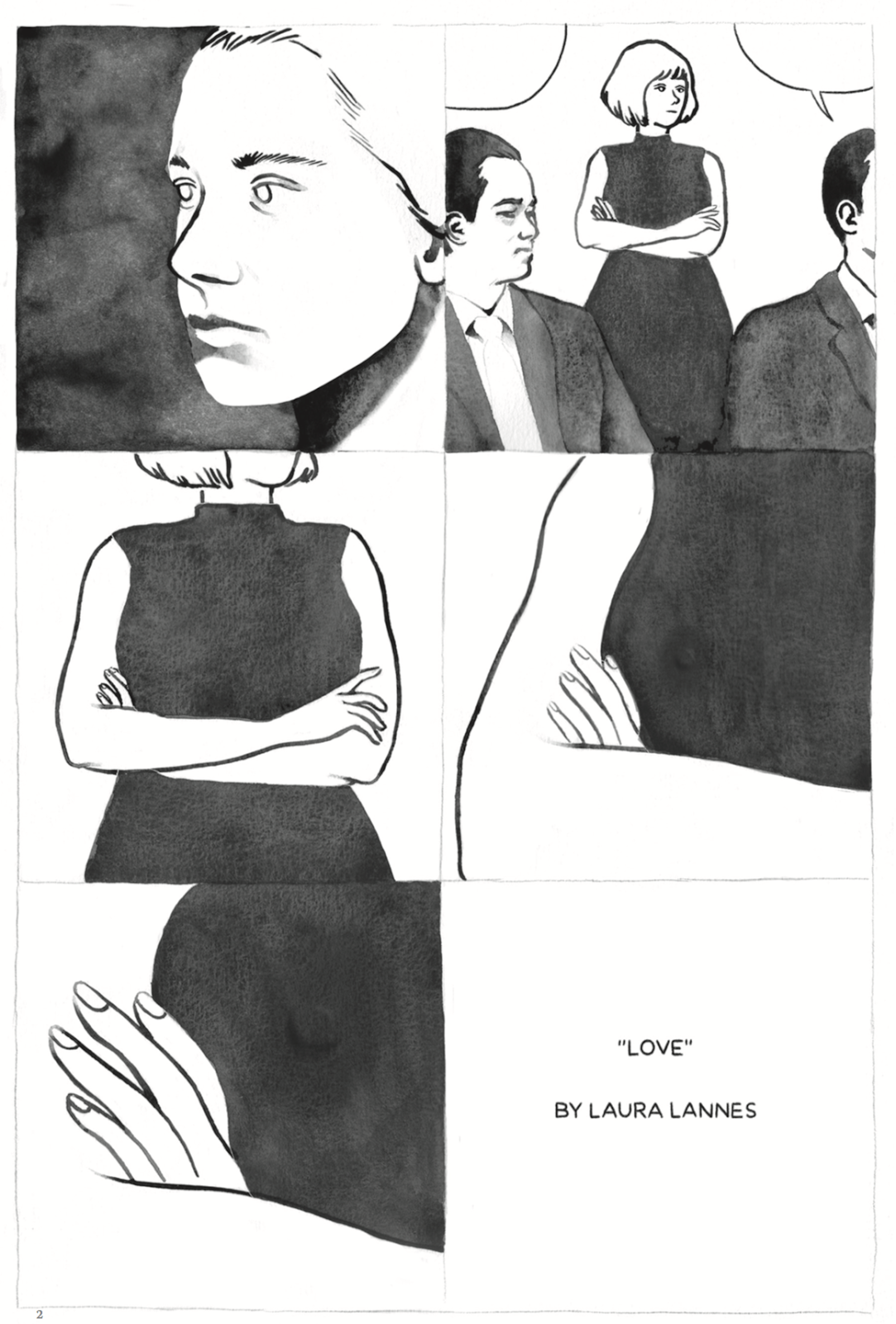 Did you want me?

Because maybe, just maybe, the kind of catharsis we all allegedly get from listening to Louis C.K. call his daughter a bitch is a kind of catharsis we actually get from fiction that responsibly challenges the limits of what is okay in a sub-moral, almost visceral sense (and not just in a, “don’t leave the room until I finish jacking off” sense”).  Mirror Mirror II is at once a frivolous memento mori and an outright challenge to your own personal space.  It is a reminder that (if we are lucky) the personal events that connect us to death and to the erotic are nothing but peepholes that unveil only the most pathetic glimpse of a big, nasty, black lake that connects all of our lived experiences.

Laura Lannes’ Love is the perfect comic to kick off the ensuing party of sex and death contained in this anthology.  It’s just the beginning of a pattern of excellent editorial decisions by Gfrörer and Collins; this comic sets the tone for the rest of the book in almost too many ways to count.

The first page of Love is one of my favorite first pages of the past few years.  This story that closely intertwines sex, power, and the abuse of both together begins with a demented boss staring off into smudgy, distorted blacks, then fades into a shot of her subordinate’s nipple, just barely seen through an identical blackness that comprises her dress.  Lannes’ austere profiles mixed with the oppressiveness of these blacks visually establish the boss’s obsession with her employee.  It also sets a strong precedent for how Lannes’ uses negative space, and even just white and black themselves, as vehicles for the story.  It can’t be overstated what it means for the first full story in a black and white anthology to hit a homerun with its use of black and white from the very first page. 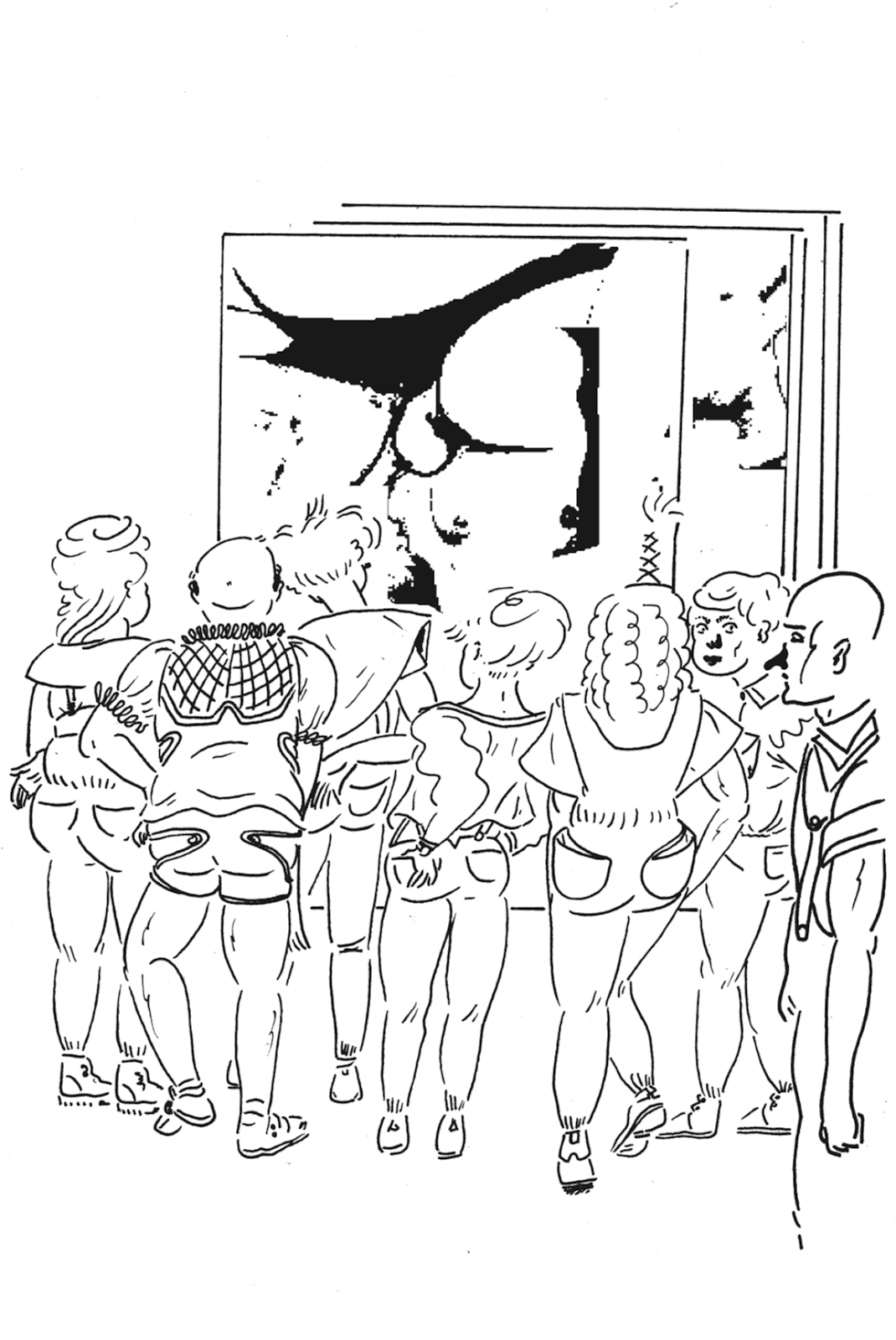 Who wishes to start the critique?

Sean Christensen’s Images Intimately strikes the sweetest note out of all the work in Mirror Mirror II.

While that’s mostly because the most gruesome thing to happen is a shaved butthole, the work also combines such candid moments with meditations on artistic intent and context and the role they play in our interpretations of an artwork.  Though the comic progresses through a critique of several pieces of art, the only dialogue occurs in flashbacks to the moments that inspired each work’s creation.  Images is so genuine in its portrayals of the lives of these characters that the reader can come away purely enjoying the story without having to flex their brains about finding meaning in abstract art.  Still, Christensen leverages something only comics can achieve, by viscerally confronting the reader, visually, with feelings about a work of abstract art that would never otherwise elicit those feelings from the average person. 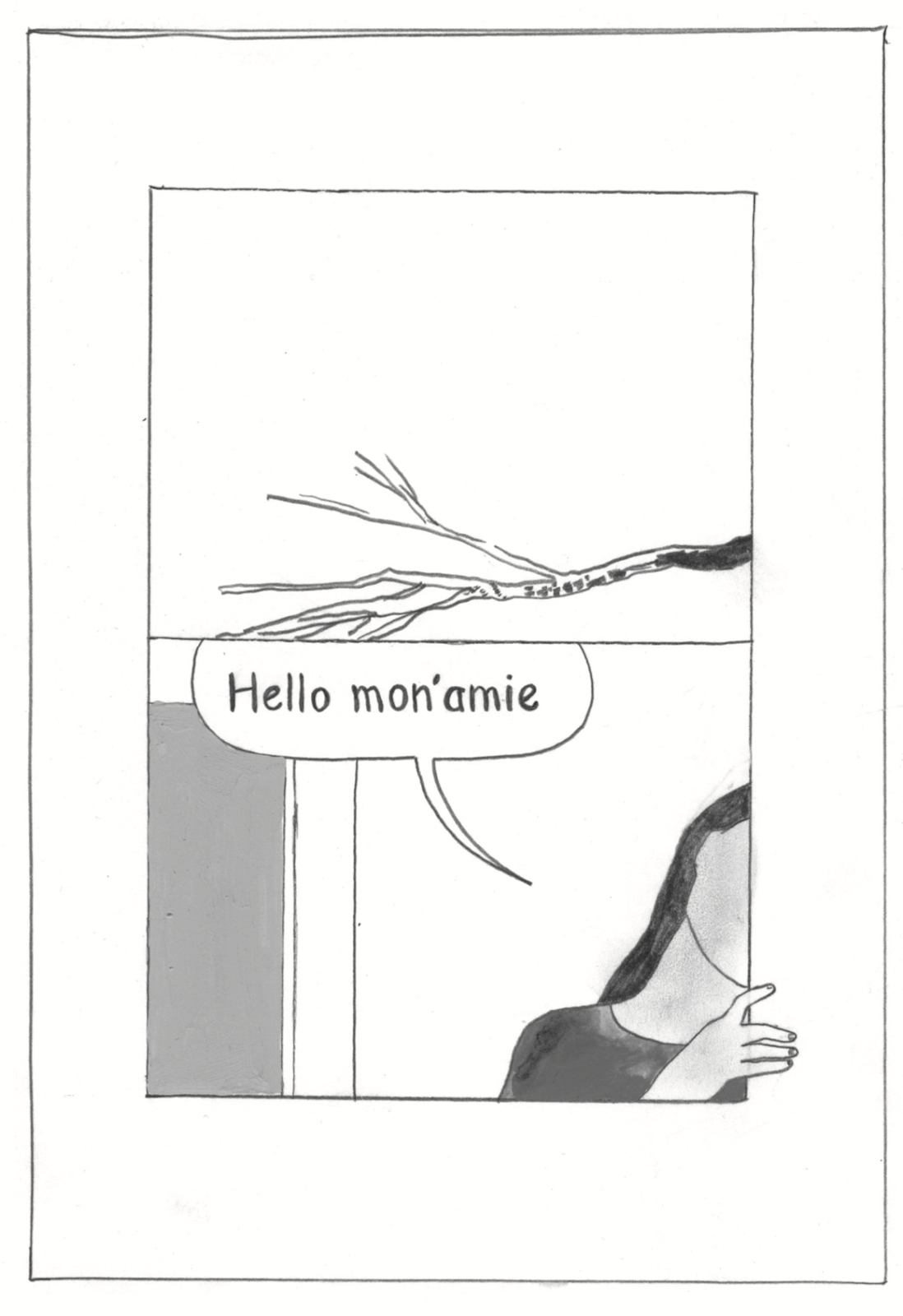 Aidan Koch’s The Estate is prima facie charming in the way that it toys with the medium, even to the least discerning reader, and in the surprising elegance of the minimally presented elements.  A speech bubble molds itself into a question mark.  Eyes follow that which they view.  A pretty bird steals the show, merely standing, minimally composed in Koch’s meager lines and just-barely-smudged blacks.  Yet the triumph is not just in Koch’s playfulness, but in her ability to fuse this playfulness with a serious sense of formalist exploration that doesn’t pull the work into the realm of the coldly calculated.

Each of the little examples I’ve mentioned are substantial in their impact in this comic when imbued with the time that Koch gives them, often by maneuvering these tricks across panels.  By transposing the eyes of one character to be adjacent to the thing which that character is viewing, it is less like the reader sees what the character sees and more like what is represented is the seeing.  Surely the act of seeing can likewise be represented by showing a character in the same panel as the thing it’s viewing; and yet, that is what makes Koch’s choice so much more subversive.  There are layers to these choices, because of the way she chooses to hide the eyes previously for instance. 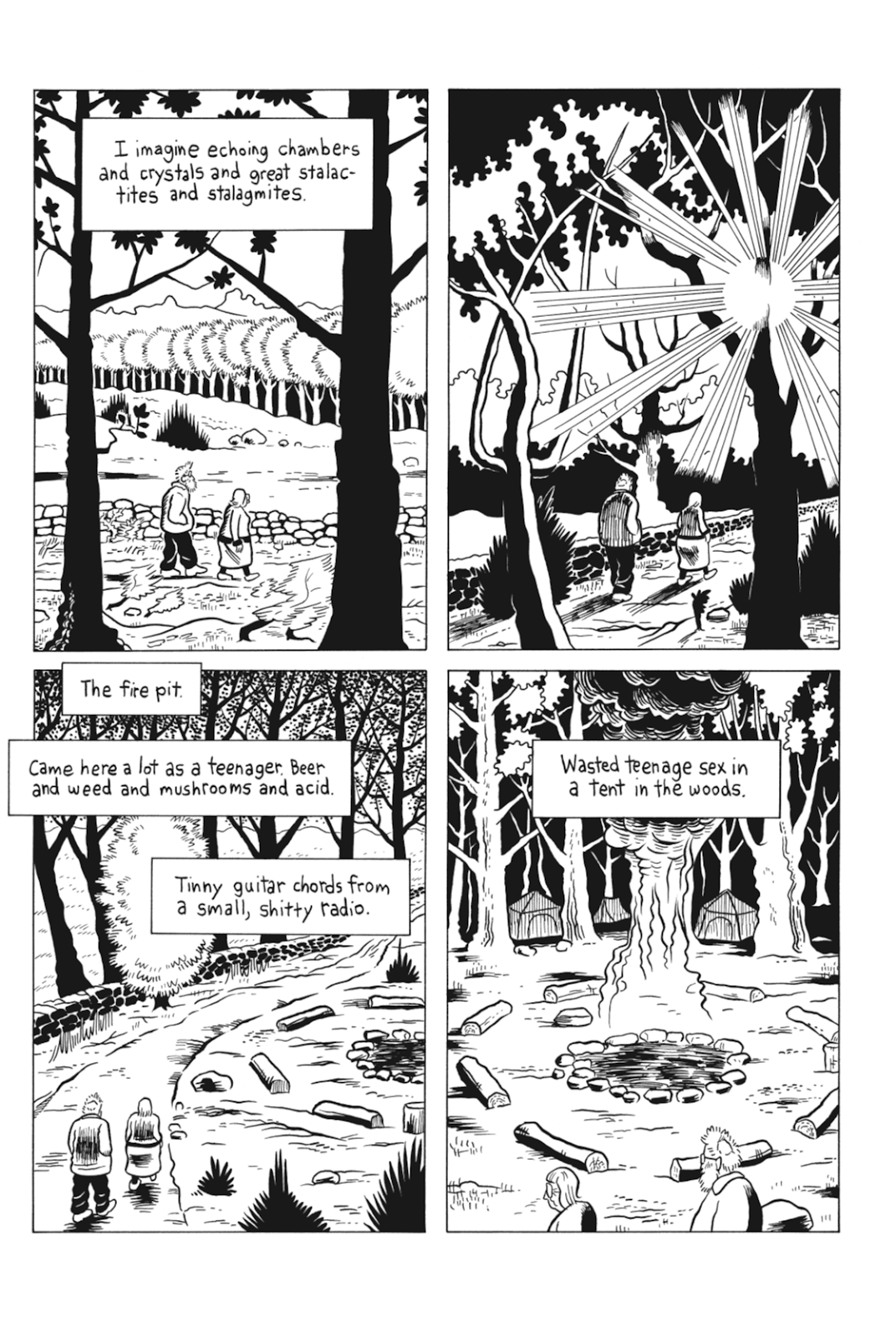 Had always been curious how far back it goes.

“It” here could be construed as the titular object of Josh Simmons’ The Cave; yet, “it” may also be the burgeoning well of resentment a character feels towards his aging mother.  I can think of nothing more bereft of schadenfreude than watching a grown man treat his mother like a child, especially for reasons purely born of his own insecurities.  Simmons’ seizes on this very fact, and he uses it to take all the wind out of the sails of the idea that it’s somehow cool to be passively aware of what a dickhead you have become.  Not only is it uncool, in this case: it’s horrifyingly uncool. The Cave benefits even further from being punctuated (book-ended, even; literally!) by an extremely fitting Clive Barker illustration. 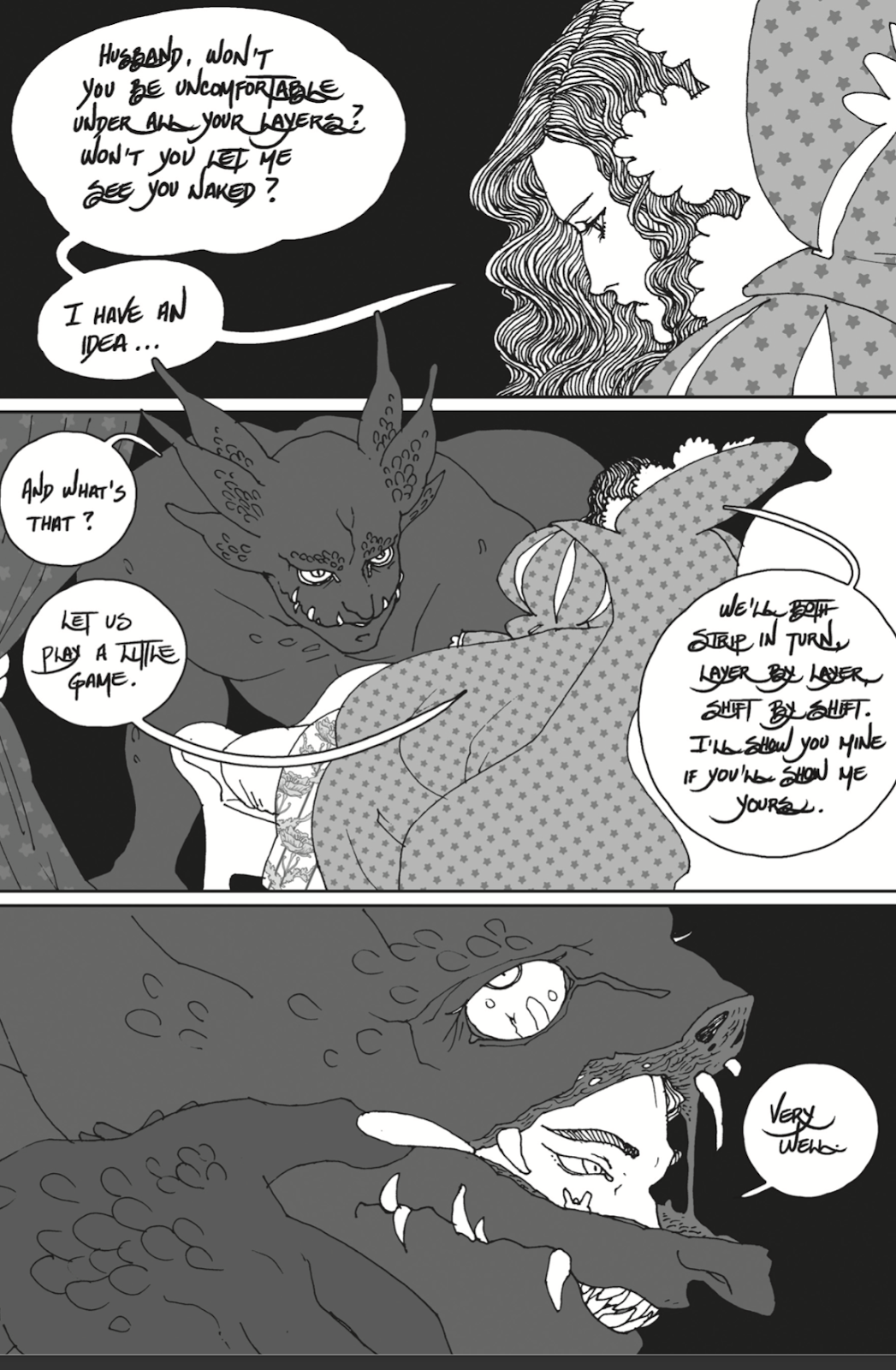 Show yourself, show me…

One of the most impressive entries in Mirror Mirror II is Trungles’ Shifts.  Trungles is a name that’s hard to avoid if you follow pretty much anybody in comics twitter who is even webcomic-adjacent.

And Shifts fucking kicks my ass.

Everything about this comic is… right.  It’s right about sex, it’s right about power, and its pacing still blows me away.  So much in Mirror Mirror II ends with the reader left hanging by a thread.  Yet when Trungles leaves us here with a question, it knocks the wind out of me. There is no way the reader can appreciate what they are about to read given the first page of this story.  All you will get a sense of is Trungles’ knack for flowing details and layering page elements.  Flanked by one of Freibert’s one-page entries and a blank page leading into Al Columbia’s spectacular run of entries, Shifts is given the room it deserves to blossom.  The flowing hair of the final panels feels like it’s still flowing once the reader is left hanging on the question of what it means — what it really means — to bare oneself to another.  Credit is due to the editors for giving this story the space it needed and deserved to breathe these truths. 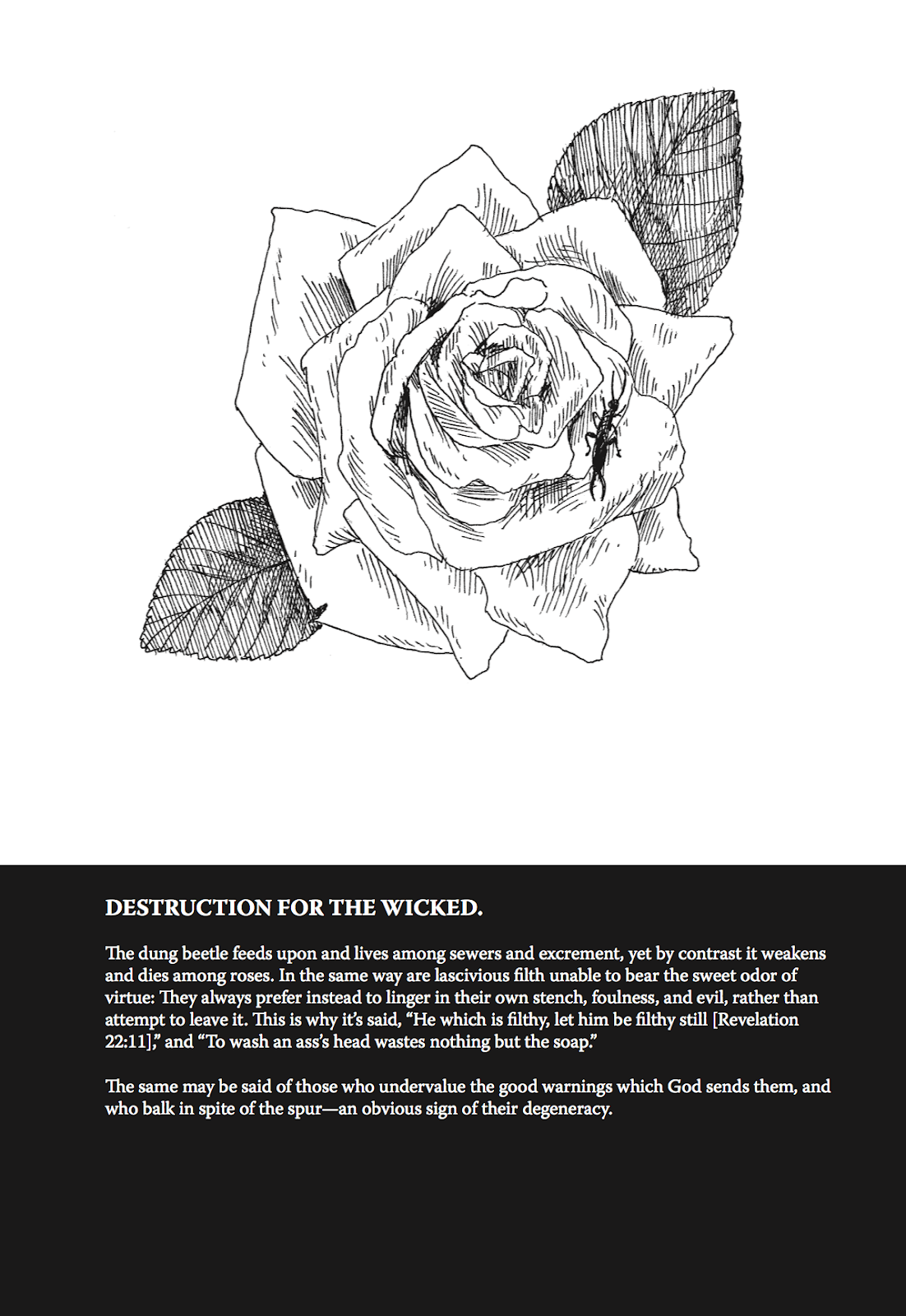 In Imitation of Nature

Heroic Devices is Gfrörer ringing a bell for things-in-themselves.  By adapting a 560 year-old work and juxtaposing each of the original author Paradin’s dictums with a singularly drafted image, these images remain talismans through which the timelessness of these aphorisms is reaffirmed and extended beyond mere heraldry.  Mirror Mirror II is a book flooded with meditations on finite things.  While this isn’t to say that a dung beetle is infinite, these kinds of anecdotes will surely (and already have) outlive the fleeting desires that connect me to other work in this book.

I think it is exactly right when co-editor Collins’ says (in the same podcast linked earlier) that this work “unlocks” what the reader should be doing with the rest of the book.  Where I depart with some other interpretations is that while I do find the work inherently a bit creepy, I didn’t read any anatomical features in the illustrations, despite the fact that some are literal anatomy.  Placed in the middle of the work, the reader’s momentum from scanning sequential art is brought to a halt. Gfrörer draws on the power which the context of the anthology alots her and channels the abject through the iconic, singularly and repeatedly.

I think there was a lot of opportunity to be a visual sophist and add too many frills to a series of ponderings which are truly thoughtful and efficacious.  Gfrörer’s choice to keep this as a work that goes image-by-image rather than adapting it to something louder, and perhaps even more reminiscent of a comic, is one that augments source material that needed very little help to start. I heard many things in hell

Without realizing it until the imminent “I’m writing about these people so I should probably google the ones I don’t know” phase, I had encountered Meaghan Garvey’s work before, having previously seen this killer Future shirt that I wish I could still buy.  Here, her dense graphites become charcoals, which plays perfectly in a story that is about a haircut as a preparation for death.

The imagery, like some of the prose, is laid on thick — eerie reflections, haircutting instruments, figures both angelic and skeletal groping — which fits well with the deliberate pace and the oppressive blackness of the pages.  The page that stands out most, though, is the single, outright, non-reflected frontal we get of the main character.  Garvey does well to illustrate the brooding on this character’s face in this one moment of apparent normalcy.  What we see in her eyes is what the other panels suggest by both their words and their refusal to outright show us this disease’s victim: this is a character that, if she looked in the mirror, would not recognize what she saw.

In writing this review, I first attempted to sum things up as best I could about the kind of work Mirror Mirror II is; but so many of the individual works themselves reached out and grabbed me in particular ways that I felt compelled to say something about each one.

And this just kept happening.  There’s still more work to talk about, from Carol Swain (shit, one of my favorite comics in the book was hers!), Al Columbia(!), Noel Freibert, Dame Darcy(!!), Mou, Uno Moralez, a murderer’s row of Clive Barker illustrations(!!!!!), a piece authored by co-editor Collins, and more.  But any omissions certainly won’t haunt me as much as the work itself.

While words like “degradation” and “abject” don’t follow a straight line to “empathy” either in a thesaurus or in the minds of many people, there is obviously a broadening of perspective that comes when you are rendered vulnerable.  And you cannot will yourself into vulnerability.  Alone, you can only conjure decay once you are already no longer living and breathing.  While you can still feel and fuck and fear, you must be led by a dark muse to a fetid clearing where a more communal sense of perversion and violation crawls between your toes.  You must peer at what lies just beyond. 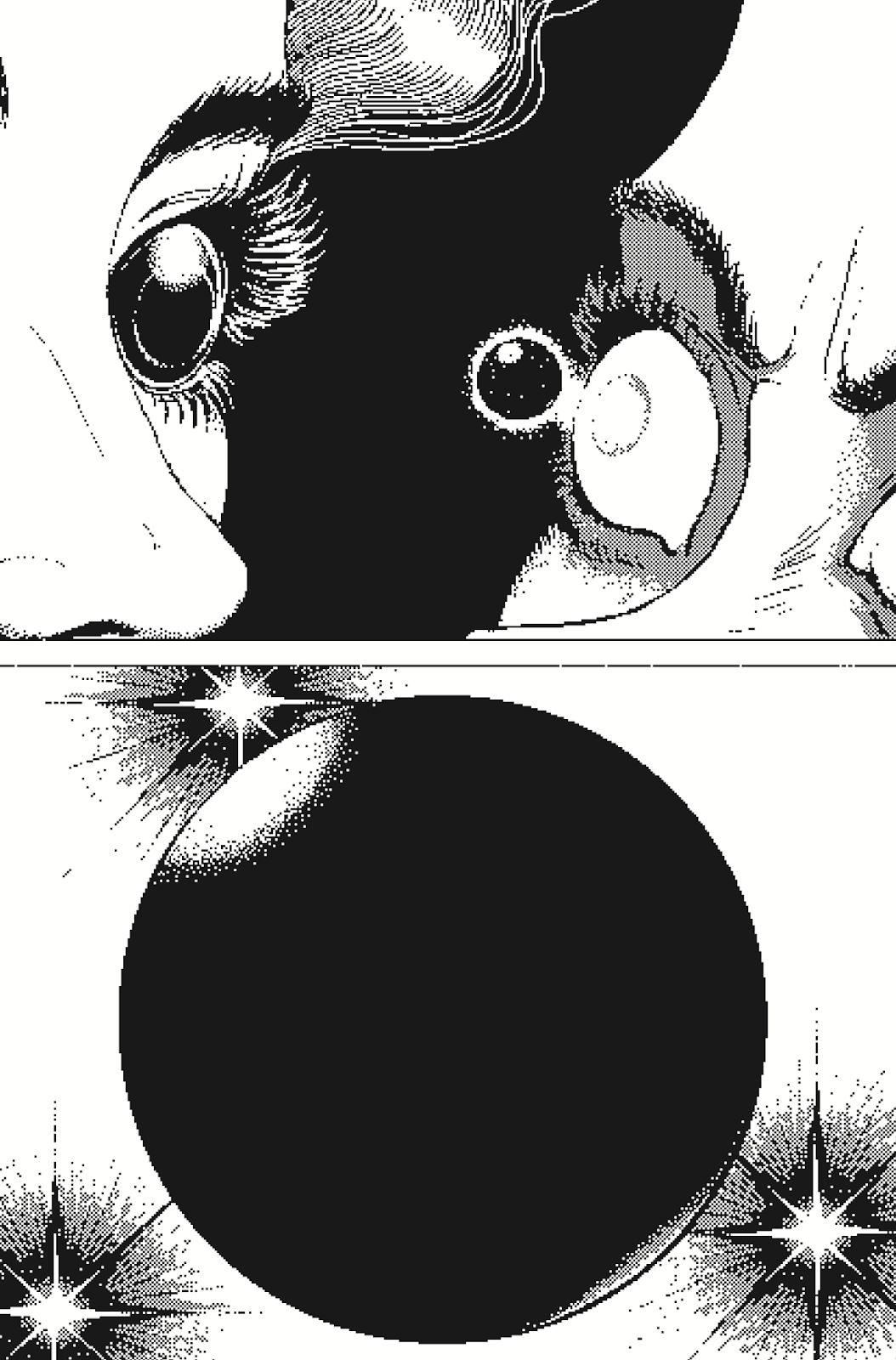 Uno Moralez from Vitalya (I’m Fucking Tired of You)